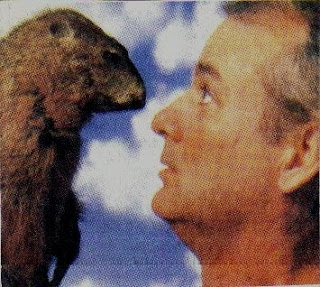 TV reporter Phil Connors, a cynical and ill-tempered human-hater, finds himself trapped in time when he wakes up one morning in the small town Punxsutawney, where he was about to make a report about "Groundhog Day" which is celebrated annually every 2nd of February, and discovers that the day is repeating itself every morning. As the only person aware of it, he tries to seduce his producer Rita, but fails. With every day, he changes until he helps everyone and wakes up with Rita on the 3rd of February.

With time, it is getting more and more obvious that Harold Ramis' shining time comedy "Groundhog Day" is a timeless classic. Namely, there are two kinds of great films—the one where you immediately realize its brilliance, and the other that you at first don’t “quite get”, yet something about that film remains in your subconsciousness, and you think about it for a long time, until something inside you makes you realize its power—“Groundhog Day” is the latter kind of great film; it comes slowly, but powerfully. The movie starts out as a simple comedy—weatherman Phil (Bill Murray) is doing a television weather forecast with these words: "...Out in California, they're gonna have some warm weather tomorrow, gang wars, and some *very* overpriced real estate. Up in the Pacific Northwest, as you can see, they're gonna have some very, very tall trees", while he turns towards the map of the USA and "puffs" the clouds on the screen to the east coast; while producer Rita (sweet Andie MacDowell) jokes around with her "transparent" blue jacket in front of the blue screen, that is not registered on the screen—but with time it becomes a pure philosophy, a symbolical essay about our daily routine in life. It's really clever how Ramis and screenwriter Danny Rubin at first "deceive" the audience that the events of the "first day" of Groundhog Day in Punxsutawney are handled too fast, almost superficially, since the time loop just repeats them again and again, offering time to elaborate on the events and characters, and even a chance to direct same scenes in different ways and different perspectives.

It is about the imprisoned human spirit crying for a change, a difference. In it, Phil becomes an individual, the only person on Earth that has self-consciousness. At that moment all other characters just became puppets who repeat the same things again and again. Plus the explanation for the mysterious time distortion is never given: it's shown more like something as natural as the weather, something that just happened and remained "outside" our reason. In the scene where Phil tells Rita: "I hope you'll remember all those great moments we had", but she of course doesn't have a clue since her memory is erased every new day, the authors are also telling something about transience and how thousands of beautiful moments were forgotten with time. The story becomes an ode to Buddhism and Karma, since it shows suffering repeating again and again, until there is a change from within a person—it is remarkable how the movie mirrors some basic philosophies about life, mostly about the emptiness due to routine, and how people can find a meaning in art, literature, music, poetry, until the protagonist discovers the basic truth: people are everything to people. When Phil reaches out to people, instead of isolating himself, he finds his meaning and hapiness. The myth of Sisyphus is mirrored in the story, while the authors masterfully exploit all the rich possibilities of the concept— especially brilliant is the long trial-error date between Phil and Rita in the sequence where he makes a goof in trying to charm her, but just "corrects" it the following day by "conveniently" ordering the same drink as her, making a prayer for peace and reciting French, which she studied. This is not just an ordinary mainstream film, but a tale about one of the hardest things in life: turning adversity into advantage; and making the best version out of yourself. All these are the reasons why many enjoy this quiet masterpiece about awakened spirituality.

Meh. I like the premise but ultimately it's a typical 90's comedy.

When I first saw it, I wasn't that impressed, either. But after re-watching it, I started to appreaciate it more and more. Don't be fooled, it just *appears* to be a typical comedy, but it has spirituality, humanism and positive philosophy few dramas - let alone comedies - can boast around. It is particularly remarkable how it shows people can change their way after finding out it leads to nowhere for so long - and how "he sees how much more rewarding life can be when he has something positive to offer people" (Robert Rotten).