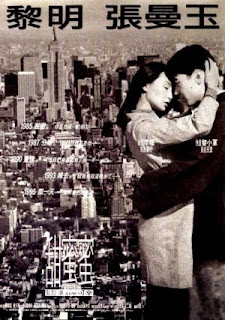 In '86, the coiled Jun leaves the northern China to immigrate to Hong Kong. there he transports food with a bicycle, gets a 2.000 $ salary for it, while he meets waitress Qiao in a restaurant. She sends him to a private school to learn English which would enable him to get a better job. A year later, Jun and Qiao become close friends and even end up in bed even though he has a fiancee. Jun gets married to his fiancee while Qiao starts a relationship with mobster Bao. In '90, Jun admits to his wife that he still loves Qiao, upon which she throws him out of the apartment. He returns to Qiao, but she goes with Bao on a ship to Taiwan. In '93, in New York, Bao gets murdered, while Qiao meets Jun again.

"Comrades: Almost a Love Story" is a gentle love story that in a conventional, but intriguing way implies that the love between the characters Qiao and Jun is so destines that it can't be avoided, no matter how long they avoid each other and have relationships with someone else. That message is slightly un-elaborated, yet the story has enough attractions to keep the viewers' attention. For instance, the exposition is amusing since the rural inhabitant Jun arrives to urban Hong Kong for the first time and does something he never did before - he buys a hamburger in McDonald's. Other gentle humorous moments - like when his English teacher (Christoher Doyle) teaches him lines like "Go to hell!" or when he meets a singer on the street and begs her to give an autograph on the back of his jacket - give color to the story that shows sad emotions of the two characters. Still, the character of Qiao (excellent Maggie Cheung) is so much more interesting due to the fact that the film presented them in a more subtle way. The camera movements are dynamic and fluid, yet the story still mildly underwhelms since it's not focused and lacks real intensity.