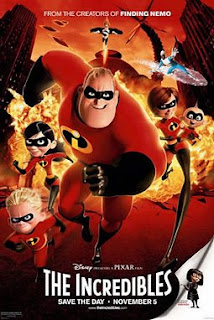 A long time ago, Bob was the superstrong superhero Mr. Incredible, but one little fanboy kid, Buddy Pine, accidentally caused him to goof and cause damage to a railroad. When Mr. Incredible was sued for saving a suicidal man who didn't want to get saved in the first place, he decided to avoid the angry public and live a quiet, secret and normal life as a family man. 15 years later he is married to Helen/Elastigirl, also a person with superpowers, and father of Violet, Dash and Jack-Jack. But he quits his boring job when he gets an assignment to become a superhero again on an island - though it turns out it's a trap by Buddy Pine, who in the meantime grown into Syndrome, a man with an inferiority complex. Luckily, Helen and the kids are able to save him and the town from the evil robots.

It became boring that all the critics used the predictable adjective "Incredible" when they described "The Incredibles", but Brad Bird's 2nd feature length animated film really filled out almost all expectations of such a story. CGI still seems eclectic and artificial compared to classical examples of animation, but Bird's obsessed sense for small touches, touching emotions and humane view on imperfect characters manage to compensate for that fact with ease: almost every scene has an eye for detail. The motif of protagonist Bob who has to do an average desk job even though he has such potentials as a superhero mirrors the lives of talented people who are sentenced to routine because the society doesn't recognize they are special, which is really well thought out since it tells something about life, but the most memorable moment is the one where Bob/Mr. Incredible is defeated by the powers of Syndrome, his enemy who was once his biggest fan (!) until he was rejected by him as a kid. Syndrome even goes on to tell him: "Yes, *now* you respect me! Because I'm a threat. That's the way it works. Turns out there are lots of people, whole countries, that want respect, and will pay through the nose to get it" - truly, such a humorous line is so true it almost reaches philosophical proportions. The film isn't that funny as much as it's clever, whereas some of the most lovable moments come swiftly, like when Helen leans towards Bob's car window and tells him she loves him very, very much, before he leaves. Some more serious complaints could be aimed towards a too action packed finale, some heavy handed scenes, too much 'cartoon violence', exaggerated facial expression of the characters and occasionally arbitrarily ideas. Still, aside from that, it's amazing how well the film works as pure entertainment on a higher level, which is why you simply forget the flaws with time and simply enjoy it's value.