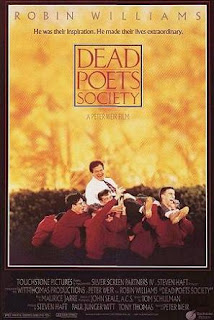 In '59, English teacher John Keating goes to teach at a private prep school where students prepare for college education. In the school, strict rules are applied, as well as in the homes of the students, whose parents satisfy their own ambitions through their destiny. Mostly emotionally sustained, the students thus experience the creative Keating and his unusual teaching as liberating, as well as his slogan "Carpe diem" (seize the day). But, one student, Neil, realizes that he will never achieve his dream of becoming an actor because of his strict parents, and thus commits suicide. The blame is placed on Keating who is expelled. But as he returns to school to pick up his things, all the students salute him.

In this drama, written by Tom Schulman, director Peter Weir again explored his often theme of an individual trying to live freely or escape from an autocratic environment, crafting a dedication to the awakening of damped emotions, while in doing so decided to remain sober and quiet, avoiding stepping into pathetic territory. Anyone who can remember their high school years will identify with John Keating, a teacher every student would love to have, a friend and a mentor whose teaching transcends the formal topic and touch upon life itself. "Dead Poets Society" is not a film about action. It is a film about changing the state of mind. The sequence where Keating orders the students in class to rip a page depicting an equation for measuring the quality of a poem is extremely powerful, on so many levels, and really helps ignite the film and the spirit of the teenagers. It also features arguably the greatest and single most emotional line Robin Williams ever had the opportunity to play out, besides his line on the bench in "Good Will Hunting", when he gives an answer at the meaning of life: "That you are here. That life exists, and identity: *that* powerful play goes on and you may contribute a verse. What will your verse be?"

This is Williams indeed in his finest hour. It seems even "The Simpsons" played a wonderful homage to Keating with their gem of an episode, "Lisa's Substitute", which also features a remarkably good teacher for Lisa. Maybe Weir plays it too safe, yet he directs the story smoothly, doesn't let emotions remain only in theory, has a humane touch and while the line "Carpe diem" remained his trademark. Schulman is also, thankfully, very honest: one lad, Overstreet, follows the "Carpe diem" credo and tries to persuade a girl he loves to go out with him, but it doesn't work out. He admits it, yet adds that at least he finally summoned the courage to do it. Among the most successful moments are simple jokes that transmit the creative teachings of Keating and his influence on the "dead" lives of students. The film is really competently crafted, just enough to notice the effort and good intentions of the authors, though the finale seems somewhat melodramatic, schematic and forced at times, especially between scenes of Neil (Robert Sea Leonard from "Dr. House") and his father, who does not want him to become and actor because he thinks there is no bread in that business. A few mild moments, yet Weir managed to make an unconventional an untrammelled film-feeling that does Keating's unconventional and untrammelled teaching justice.