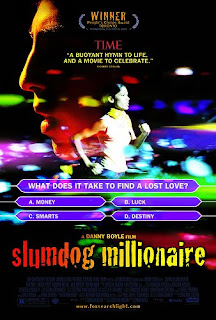 
Mumbai. The young Jamal Malik is interrogated by the police because they suspect he cheated in the TV show "Who Wants to be a Millionaire?" since he suspiciously answered all the questions correctly. He explains them that he "learned" all the answers from his life experience: as a child, he and his brother Salim lost their mother due to Hindu extremists and thus learned the image of Rama the "hard way"; they got a 100 $ bill by chance and thus remembered that Benjamin Franklin is on the note; Salim used a revolver and thus Jamal heard that the weapon was invented by Samuel Colt, etc. All that time, Jamal just thought about Latika, the girl he fell in love with. Jamal is thus brought back to the show and wins, not only the money but also Latika's heart.

This is amusing. The Oscars, Golden Globes and the BAFTA awards all want to present us "Slumdog Millionaire" as the best film of the year, yet it's a fine, but overrated achievement. Maybe I saw "Who wants to be a Millionaire?" one time too often and thus I'm fed up with it, maybe I simply don't have such an appeal towards India's culture, but whatever way you look at it, it somehow does not seem that "Slumdog" distinguishes itself with something special from all the rest of the movies released in 2008. Director Danny Boyle has an extraordinary lightness of working with India's actors and locations, especially in the scenes where the characters speak Hindi and not English, while the sole story where the hero slowly reveals that he knew all the answers to the questions because he learned them the "hard way", by chance during his tough life (for instance, when he knows that Rama wears a bow and an arrow because Hindu extremists killed his mother when he was a child) is really cleverly structured, yet the whole thing is so serious-melodramatic that it practically resembles a soap opera at times, whereas many situations ("Chilly on willy"; a child is blinded so that it will cause pity when it begs on the streets...) are simply backward and awful.

Emotions are always welcomed, but just like humor, they can be tasteless and forced, which is why the story - despite its objective tone - seems sentimental. The sequence where Jamal shows India to two American tourists, and when they return, their luxurious car was robbed by poor thieves, so the police officer hits him, upon which the kid says: "You wanted a little bit of real India? Here it is!", whereas the American woman gives him some money and says: "Here's a little bit of real America", is the biggest kitsch in quite some time, but luckily the film is still much more realistic in the rest of its running time. The story is smooth, it has a tight rhythm, all the actors are convincing while the ending is wonderful, but as a whole the film simply doesn't have that pure inspiration for which the viewers would really be engaged by it. Its biggest virtue is definitely the fact that the authors actually dared to tackle such an unpopular theme, the one of poverty in the India's slums, which is something that many luxurious viewers from the West would rather avoid.