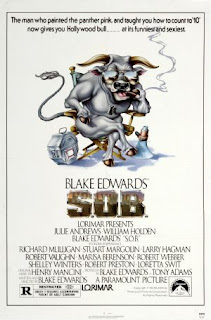 Actress Sally Miles stars in the sweet child musical "Night Wind", filled with giant stuffed teddy bears and toys, but arriving in the theaters, it turns out that it has almost no audience at all. Director Felix thus falls in depression: it's his first flop while Sally, his wife, leaves him. Producers of the "Capitol" studio, David Blackman, sends his friend, agent and doctor to him so that they can persuade him to re-edit the film. And while Felix throws up and organizes nude parties in his mansion, he suddenly decides to make a porn film out of "Night Wind" - and it becomes a box office hit. But in the end he dies.

Black and not particularly amusing satire "S.O.B." became a box office flop itself, but director Blake Edwards at least showed an almost documentary picture of ingratitude and commercial greed of (some) Hollywood producers in that kind of situation. The rest is practically a disaster. Some critics in the minority claimed it's a matter of an excellent (!) poisonous satire, but the majority agreed with the audience that the film sickeningly exaggerated in vulgarity, deformed humor and hysteria. Here and there it delights with an occasional spark of inspiration (like the review of "Night Wind": "Critics break wind") while Julie Andrews is good and courageously does her nude scenes in the finale. "S.O.B." is crammed with everything, but it's pure hassle.