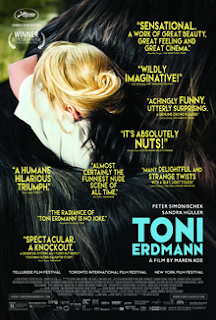 Winfried Conradi is retired, but still enjoys pulling pranks on people. After his old dog dies, he decides to travel to Bucharest to visit his estranged daughter, Ines, who works abroad as a manager for an oil company and rarely has time for anything else. After a few weird gags, Ines persuades Winfried to go back home because she is preparing herself for an important business meeting. However, he returns with wig and fake teeth, presenting himself as "Toni Erdmann" in front of all the guests at a party. Ines sees right through his mask, but Winfried still insists on playing this persona and accompanying her to meetings. After a nude party goes wrong, Ines runs after her father in a kukeri costume and hugs him. They return home to her grandmother's funeral.

One of the most overhyped European movies of 2016, "Toni Erdmann" is a strange patchwork that has a point revolving around a quirky father trying to renew a relation with his estranged daughter, yet it takes way too strange directions and dead ends to finally get there, and is not that particulary funny, either. With a running time of 160 minutes, the movie is definitely overlong and required better editing since at least an hour could have been cut from the 'empty walk' to make it more concise, whereas several scenes seem to have been invented and improvised on the spot, since many of them play absolutely no role in the storyline later on or lead nowhere. One example of a weird sequence that just screams "deleted scene"  is the one where Ines and a guy cuddle, but she orders him to masturbate and ejaculate on a cupcake, which she then eats. Strange does not always necessarily mean funny. The whole concept also makes no sense: why would Winfried insist on carrying a disguise and presenting himself as "Toni Erdmann" to everyone if a) his daughter immediately recognizes him and b) he is in Bucharest where nobody knows him, anyway? If Toni Erdmann acts the same as Winfried, what's the point of it all? There are two good jokes in the film: one is where Winfried goes to a bathroom, there is a photo of a tiger on the toilet seat and the man of the house jokes: "Watch out, he bites!"; the other is when Winfried barges in the house of a Romanian family and spontaneously starts playing "Greatest Love of All" on the piano to announce his daughter as "Whitney Schnuck", and she actually accepts and sings the entire song in front of the family. There are echoes of transience, the emptiness of modern business life and death, yet these 'ambitious art-themes' cannot compensate entirely for a lack of good writing. "Toni Erdmann" is difficult to understand, but it has a good underlying theme: the father tries to conjure up embarrassing situations for his daughter in order to "throw her" out of her boring balance, her grey routine, so that she can awaken feelings from which she distanced herself a long time ago. This enables her to take back the control of her life, and stop being led by artificial rules, which somewhat gives a sense to this weird movie.