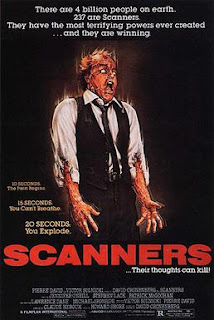 Cameron is a "scanner", one of the rare people who have the ability of telekinesis. After a woman says a snickering remark against him in a mall, he uses his power to give her a seizure, but is thus exposed and arrested by two secret agents who bring him to a laboratory of Dr. Paul Ruth. He persuades Cameron to join his fight against another scanner, Revok, a criminal who uses his powers to kill people. Cameron meets another group of scanners, but all are killed by Revok's men, except for Kim. After Revok's men shoot Paul, Cameron uses his power to cause their chemical factory to explode. Revok intends to use a drug, ephemerol, in pregnant women in order to breed a generation of scanners who will take over the world. Revok also reveals that Ruth was his and Cameron's father. In a telekinetic duel in the office, Cameron's body burns out, but his mind is transferred into Revok's body.

David Cronenberg's early hit, "Scanners" gained a small underground cult following. Cronenberg was not interested in the concept of telekinesis for some philosophical, emotional or psychological explorations, as much as he was interested in extracting a simple shock, gore, violence and horror value out of it, which makes "Scanners" almost seem like an exploitation film at times. While this is a rather thin one-note take on it, it still has some chilling moments, such as the (in)famous sequence of the evil scanner, Revok, sitting next to a man at a table and using his telekinesis to cause the latter's head to explode, in a very bloody manner. Other of Revok's methods are equally as scary, such as using his power to cause a man to use his own gun to commit "forced suicide", and thus it is reasonable why Dr. Ruth and the good scanner Cameron are trying to stop him, representing two camps, one trying to use that power for good, and the other for evil. Despite a limited budget, Cronenberg managed to craft a fluent and rather gripping little thriller, and this audacity later gave him a strong reputation. The storyline takes rather strange turns and meanders (most notably in the peculiar plot twist that is a reminiscent to the one in "The Empire Strikes Back"), while it polarizes the viewers and critics too much, as well, but is overall a condensed affair, with a highlight being the final telekinetic duel between Cameron and Revok, who use their powers to mutilate each other from a distance, in a shocking finale with a twist.