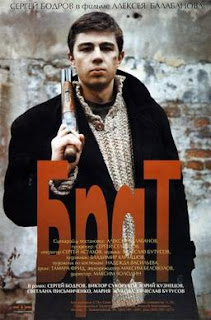 After being demilitarized, Danila (20) is lost and does not know what to do with his life. His mother sends him to Saint Petersburg to find work at his brother, Viktor. There, Danila befriends Hoffman, a homeless German man; Kat, a drug addict; and Sveta, whom he wants to protect from her violent husband. Viktor, who turns out to be a hitman working for the mafia, passes on an assignment to Danila who shoots a man at a market, but gets wounded. Danila gets another assignment, to shoot a man together with two mobsters, but they find another man in an apartment and are thus forced to wait for hours. When their target returns, the two thugs kill him, but Danilo kills them. He buys a gun and shoots the main mafia boss who took Viktor hostage. Sveta abandons him for her husband, so Danila leaves for Moscow.

As it is often the case with the largest hits from foreign countries, many of them are relatively unknown or unpopular outside of their homeland. Such is the case with "Brother", that unexpectedly emerged as one of the highest grossing films in Russia, yet it had little appeal to international viewers who had little understanding for it outside that country. While it was interesting for the Russian audiences to watch a movie tackle the taboo topic of the St. Petersburg mafia, the sole movie is disappointingly conventional and ordinary, assembled like a random set of episodes and events that never align into some purposeful whole. It simply lacks highlights, getting stuck into typical social drama cliches of a young lad who becomes an accomplished criminal / assassin for the underground. All the episodes involving supporting characters (Kat, Sveta, Hoffman) lead nowhere, whereas the dialogues are boring. The viewers expected some twist to this crime story seen a hundred times, yet no twist ever showed up. The only memorable sequence is when Danila and two mobsters are sent to shoot a man, but find another person in the apartment. When Stepan, a radio director, knocks on the door by accident, he is also sent into the apartment and kept there, as the mobsters wait for their target to finally appear, but Danila remarkably promises that Stepan will not be harmed. When the "target" finally shows up in the apartment and is killed, the thugs want to kill Stepan, as well, but Danila intervenes and instead kills the two mobsters. He then has a drink with Stepan and simply let's him go, keeping his word, which is probably the biggest surprise in the entire film, yet also serves as an example of how pale all the rest of sequences are, in this solid, but forgettable patchwork.