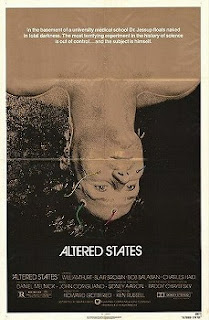 Eddie Jessup is a young scientist who is fascinated with altered states of consciousness and thus spends hours in dark, isolated chambers filled with water in order for his colleague, Arthur, to record his subconscious brain activity through the lab instruments. Eddie meets anthropologist Emily and they marry. Several years later, Eddie has a mind shattering hallucination induced through a Mexican drug, and thus returns back to Boston to analyze the substance with Arthur and Mason. These trips cause Eddie to lose his mind, and he imagines to be a caveman who kills a goat in the Zoo. Emily begs him to stop with the experiment, but Eddie is determined to continue. Finally, realizing that there is nothing behind these primordial states, Eddie abandons them and declares that he loves Emily.

Paddy Chayefsky's final screenplay was an unworthy farewell to the brilliant screenwriter's career, an inarticulate mess of a movie that is equally as inconsistent thematically and narratively as the bizarre, grotesque hallucinations that it depicts on the screen. Loosely based on the experiments of neuroscientist John C. Lilly, "Altered States" cannot cope with its own terms as to what it wants to be: first it mentions Eddie's religious beliefs when he was younger, then to move to his exploration of primeval thought circuits, then to switch to his mental degeneration, all of which do not lead to any point, except for the protagonist to suddenly proclaim his love for Emily towards the end. Even in the sequence where he transforms into a cave-man who is in a Zoo, behind bars, only to transform back to a human, only to be arrested and sent to jail, behind bars, the movie refuses to draw some parallels towards our modern society or deliver a commentary on the human culture. Nor does it offer a scientific approach, instead relying on pseudoscience which today seems rather dated. A bizarre patchwork that is just an excuse for surreal hallucinations (a crucified man on a cross wearing a goat's head; phantasmagorical bubbles; Eddie imagining that his hand is mutating...), of which only two are expressionistic-poetic (the remarkable "flow-of-time" moment of Eddie and his naked wife lying on the ground, while they are slowly covered by a wind of sand, as if they are slowly fading in time; the "whirlpool" in the laboratory), a movie that signalled a symbolic end to these "drug hallucination" films that started in the 60s, since they themselves dissolved into experimental films in search for a point.