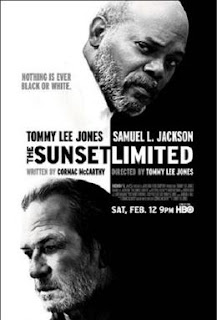 New York. A janitor saves the life of a professor who wanted to commit suicide by jumping in front of a subway train. In the janitor's apartment, the janitor tries to talk the professor out of repeating that again. Their views are different: the professor is pessimistic, an atheist and a nihilist who thinks that life has no purpose, while the janitor is an ex-convict who believes in God and thinks that all the troubles have a purpose and a conclusion in the end. Finally, the professor leaves the apartment, unimpressed, and it is unknown if he will try to commit suicide again.

Tommy Lee Jones' 4th directorial work is a highly unusual, minimalistic chamber play that unravels only inside one location, an apartment, and only between two nameless people talking to each other, yet, unlike similar "My Diner with Andre", "The Sunset Limited" was not so completely philosophically deep to truly cover up for such a thin concept and keep the viewers engaged until the end. Jones and Samuel L. Jackson play basically two opposing philosophies at life which are at clash from the dawn of the age of Englightenment: the atheist, cold, rational and depressive one vs. the religious, faith-based Leibnizian optimism. Their dialogues are what the movie is made off, yet too much of them end up too lengthy without a clear point or a purpose. One of the best moments is when the janitor tells his story about how the beat up a prison convict to a cripple, which made him change and become religious, only for the professor to mock him that a man actually had to be turned into a cripple just for him to find God. This existentialist art-film is not for everyone, especially not for people who cannot concentrate, but it has a few interesting quotes that stimulate into thinking ("Moral-leper colony"; "You give up the world line by line..."; "Show me a religion that prepares one for nothingness, for death. That's a church I might enter. Yours prepares one only for more life, for dreams and illusions and lies. Banish the fear of death from men's hearts and they wouldn't live a day."; "The darker picture is always the correct one. When you read the history of the world you are reading a saga of bloodshed and greed and folly the import of which is impossible to ignore. And yet we imagine that the future will somehow be different.").