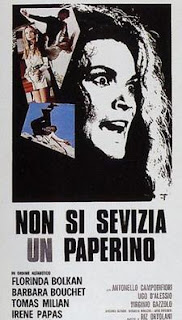 A small town in the Italian South. Three little boys occasionally go to a desolate hut and peek to watch two locals who hire prostitutes for sex. Not long after that, one by one, the three boys are found dead. The police arrests a local idiot, Barro, but it seems he only found the corpse of one boy and decided to blackmail the parents to pay him money. A witch is the next scapegoat, who is beaten to death by some men at a graveyard. The murders continue, though. A reporter from Milan, Martelli, and a woman, Patrizia, team up to investigate. They discover that a mute child, Malvina, ripped the head of a rubber duck, and suspect she imitated the murder she observed. It turns out that a local priest, Don Alberto, is the serial killer, because he wants to prevent boys from discovering sexuality. Alberto atempts to throw Malvina from a cliff, but Martelli stops this and instead throws the priest down to his death.

Even though it is ostensibly a typical "giallo" film, "Don't Torture a Duckling" is also one giant allegory at the neurotic relation of Catholicism towards human sexuality, thus delivering also a somewhat wider, thought provocative topic in this social commentary in which the serial killer is the priest who kills preadolescent boys in order to stop them from exploring sexuality. Even though some critics attacked director Lucio Fulci for "anti-Catholicism", the story has much wider implications, tackling fundamentalism as a core problem where some people are willing to use crimes and violence just to keep their rules, arguing that such a path can eventually lead to the extinction of an entire generation. This addendum gives the typical thriller genre a richer dimension, though it still has a few problems, most notably in Fulci's tendency to use exploitation methods in some violent sequences, some of which almost end up trashy, as in the scene of priest's falling down the cliff or the sequence of some men crippling a witch at the graveyard with violent blows. Likewise, the story takes a while until it figures out who is suppose to be the protagonist, since the episodic narrative constantly switches from perspective to perspective. Similarly like Chabrol, Fulci uses a crime story as an examination of a society and has rather good camera drives in some scenes, but also likes to film some "naughty" moments that border on the limits of censorship, most notably in the unusual sequence in which a blond woman, Patrizia, enjoys "tickling" the erotic imagination of a 10-year old boy, Michele, when she insists that he should look at her naked body while she is sitting on a chair, while he is serving her orange juice.