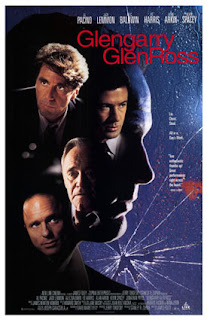 Ricky Roma, Shelley Levene, Dave Moss and George Aaronow are all salesman working for Williamson in a small company called "Premiere Properties" held by Mitch and Murray. One evening, a motivational coach, Blake, arrives at their office and warns them that they will all be fired if they don't sell their quota of units of a worthless land, Glengarry and Glen Ross, by the end of the month. The salesman are given only two contacts each, but their phone calls cannot convince the people to become their clients and buy the land. Moss and Levene thus break into their own office at night to steal the better contacts as to finally be able to sell to some wealthy people. The next morning, Levene caves in and confesses everything to Williamson. Roma sells a unit of land to James, but the latter's wife convinces him to try to annul the deal.

More than anything else, David Mamet's critically recognized salesman drama is one giant commentary on Darwinian capitalism that emerged somewhere around that era, a film so scary and disturbing in its existentialist depiction of characters who can lose their jobs (and their life, as well) any time precisely because it is based on reality. In this "capitalist horror film", all the human relations (loyalty, friendship, love, honor...) are irrelevant and the salesman are reduced to Homo Capitalis, their only meritocracy being how much money do they earn for their boss. Already in the opening act, the salesman are introduced to a motivational coach in the office, Blake, who warns them that they have to fulfill their quota of sales: "We're adding a little something to this month's sales contest. As you all know, first prize is a Cadillac Eldorado. Anyone wanna see second prize? Second prize is a set of steak knives. Third prize is you're fired." When one employee, Dave, complains at this kind of talk, Blake is quick to attack him: "You drove a Hyundai to get here. I drove an 80,000 $ BMW. That's my name! And your name is you're wanting... That watch costs more than your car. I made $970,000 last year. How much did you make? You see, pal, that's who I am, and you're nothing!"

Mamet's screenplay observes how in such a set of rules, where earning money is the only thing of importance (even though it is implied that there is a recession and the people don't have that much money to spend, anyway), ethics quickly dissolve and the characters resort to corruption, lying, stealing and double-crossing to survive. The cast is fantastic with all the actors giving excellent performances, from Jack Lemmon through Ed Harris up to Al Pacino, who delivered another highly competent role. "Glengarry Glen Ross" is not without (black) humor, as well, as in the sequence where the once desperate Levene brags how he suddenly managed to sell eight full units of land to a couple, the Nyborgs, for 82,000$, triumphantly shouting at his boss—until, in a twist, it turns out the check of the Nyborgs bounced because they are a broke, insane couple without money. The sharp, clever dialogues help contribute to the film, creating a giant case study  without a clear main protagonist: the whole phone salesman industry is the main protagonist of the story. One major omission is the final act that ends on a rather vague note: the ending is anticlimatic, without a clear point that circles out all of these events set during 24 hours, which leaves the storyline feeling somewhat incomplete, yet that is a minor flaw in the overall very good example of intelligent filmmaking in this film.