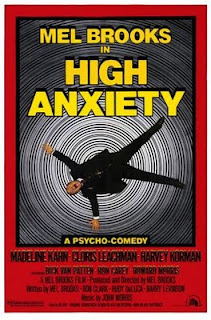 Dr. Thorndyke, a psychiatrist suffering from fear of heights, is appointed as the new administrator of a mental asylum in Los Angeles after his predecessor died in mysterious circumstances. Upon arriving there, the suspicious behavior of nurse Diesel and Dr. Montague attract his attention. At a conference in San Francisco, he is contacted by Victoria Birsbane, whose father is still held in the asylum by Diesel and Montague even though he is completely normal. Diesel and Montague want to throw Mr. Brisbane from a tower to make it look like suicide, but Thorndyke saves him.

A spoof of dozen Hitchcock films, "High Anxiety" seems, just like most Mel Brooks comedies, as a rough patchwork, though still far less so then his last five films which had less good jokes to offer. Unlike "History of the World - Part 1" and "Blazing Saddles", Brooks here actually has a tight story, yet wonders between clever-inspiring and silly-embarrassing jokes, and depending on the mood, the viewers will either be swayed more towards the positive or the negative sides of the film. One of the most hilarious jokes is entirely abstract, a deliberate mishap when the camera zooms in to a dining room where the protagonists are eating, but actually approaches them so close that it breaks the glass on the window (!), upon which the protagonists just stop, turn and look into it for a minute, so the camera pulls back; and then they just continue talking as if nothing happened! That Brooks can make up an intelligent joke is also evident in the ironical sequence where Dr. Thorndyke is informed that his hotel room was canceled because a certain "Mr. MacGuffin called to make a reservation, but canceled it" whereas the spoof on "The Birds" is a riot. Unfortunately, it seems the author rather took the easy way and filled the movie too much with spasmodic, empty or overstretched jokes which rely too much on the shrill expressionistic performances to be pulled through, no matter how good an actress Cloris Leachman is.