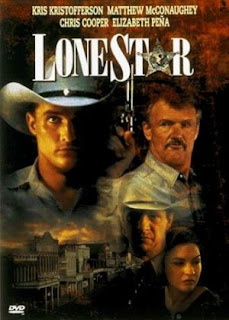 After two men find a skeleton somewhere in Texas desert, it triggers the awakening of long suppressed secrets of a small town situated near the Mexican border. Namely, it is the skeleton of Wade, a highly corrupt, racist, brute Sheriff who mysteriously disappeared 40 years ago. The current Sheriff, Sam Deeds, thinks that his late father Buddy killed him. Buddy was respected, but Sam never forgave him for not allowing him a relationship with Hispanic girl Pilar. Finally, Sam discovers that Hollis actually shot Wade and that Pilar is Buddy's illegitimate daughter, though he decides to continue his relationship with her.

"Lone Star" starts off as "In the Heat of the Night", slowly transforms into a Hispanic version of "Sayonara" and ends with a plot twist that is reminiscent of the Akio-Anthy relationship in "Utena". John Sayles, who received his second Oscar nod in the category of best screenplay, is an intelligent author, though his tactic of acquiring more critical ground through shaky racist themes is limited: in some instances, the theme fits with the story, but on other instances it fits to a lesser extent. Sayles cleverly observes the problems of the American and Hispanic community in the story, even arguing that these problems did not arise up from their interactions in our present time, but a long time ago, centuries ago, from political decisions (Texas Annexation) and mistakes already established in the 19th Century: as such, they all just reflect the burden of history and were in advance set-up to carry it on their shoulders. Sayles has balance and measure, yet the film still seems dry and unexciting. One of the most inspiring moments shows up when the story goes to a flashback, to show a teenage Sam talking with teenage Pilar on the river; she says that she doesn't believe "that it is wrong for White people to fall in love with Hispanic people" and the camera, in one single take, turns towards left to show the grown up Sam saying: "I don't believe it, either." The movie needed more of such poetic solutions, because despite elegance, it could have engaged more.