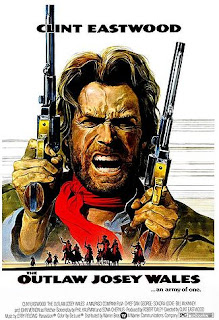 American Civil War. When Union soldiers kill his family during a raid, ordinary farmer Josey Wales joins to fight in the Confederate army, led by Fletcher. However, the Unionists led by Abraham Lincoln win so Fletcher and others decide to surrender - but the bitter Wales decides to fight on. He meets Indian Lone Watie and moves south, since bounty hunters led by Redlegs are following him. On his way, he also saves several people from slavery, among them a grandma and her daughter Laura. They settle at a small town where Wales kills a dozen bounty hunters. After meeting with Fletcher again, Wales rides towards south.

The 5th film directed by Clint Eastwood, "The Outlaw Josey Wales" was not remembered during the flow of the cinema history, yet critical acclaim assured it a certain promotion. "Wales" starts off as a Confederate 'wet dream' since the title anti-hero from the South decides to continue fighting against the Unionists even after the American Civil War is over (!), making the crucial mistake of projecting an individual crime of Unionists (who burned Wales' home and killed his family) as the universal face of the Union movement, since people from the North are all presented in negative light, in black and white solutions. Likewise, Eastwood again has troubles confining his ego - the first 10 movies where he appeared as the invincible hot-shot Chuck Norris who can never get shot and get every girl he wants were somehow more charming than the last 30 of them whereas it didn't help that he always had to - when he starred - put himself in the leading role of a movie he directed, never even considering a supporting role. Still, when the movie wonders away from the Civil War and presents new characters, it actually serves its purpose as an anti-war message where people can never escape from an "endless war". Chief Dan George is fantastic as the Indian sidekick ("The Unionists made me surrender! They even made my horse surrender! Now he is pulling a wagon to Kansas!") and humorous elements are refreshing, such as when Wales shoots the rope of the ferry on which bounty hunters were getting transported to him over the river. One can sense Eastwood's sure hand as the director through the elegant narration and a natural story flow that attracts attention thanks to its simplicity.
Grade:++
Posted by Marin Mandir at 8:47 AM