Monty Python's The Meaning of Life 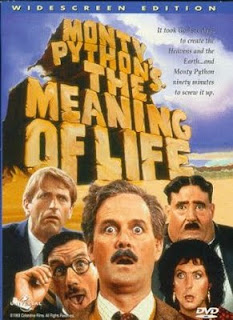 A collection of various stories, some of which do and some of which don't address the meaning of life: old employees start a rebellion in a building against their bosses and CEOs, eventually becoming pirates who rob concerns and multinational corporations...An unemployed Catholic is a father of hundred children...A teacher strips and demonstrates sex to his students in the classroom...Despite his protest, paramedics take the liver of a living man because he is an organ donor...Wherever there is a restaurant, a fat man is there to eat...A woman gives birth without pain...Soldiers go crazy during World War I.

The fourth and final Monty Python film (if their concert film "Monty Python Live at the Hollywood Bowl" is excluded), "Monty Python's The Meaning of Life" is also their worst one, a superficial, sketchy and at times catastrophically unimaginative comedy that more often than not does not justify unbearably grotesque jokes and disgusting special effects, like a hacked man who falls apart. The Monty Python crew has a great sense of humor, which was demonstrated in their TV show and previous films, yet anyone who watched their "Flying Circus" knows that when they are funny, they are really funny - but when they are "off", they *really* are "off". Unfortunately, it seems "The Meaning of Life" caught them in their "off" phase since its charm and wit are microscopic. The most sympathetic sketch is the opening with the old employees starting a rebellion in their company, advancing to pirates who rob corporations. Another joke that manages to "break through" to a certain point is the sequence where John Cleese plays a teacher who strips with a woman in the classroom in order to demonstrate sex to his students, who are completely uninterested. The rest of the movie is bitter and violent, unsuitable for younger or sensitive audience. Unfortunately, "The Meaning of Life" is entirely meaningless, a mess where the Pythons went more overboard with excess and tasteless ideas (the fat man who throws up every 20 seconds in a restaurant) than humor and laughs. Whatever the meaning of life is, it has got to be something better than this.