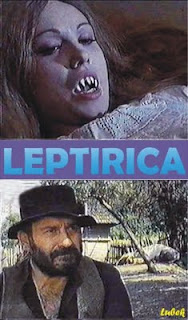 In a small village, already four millers were killed in mysterious ways in just one year. The pattern is always the same: they are found with bite marks on their neck. Strahinja is a young lad who wants to marry Radojka, but her father Živan is against the marriage. While taking over the role of the miller, Strahinja is attacked by a vampire, but survives. The villagers find the grave of Sava Savanović, allegedly a vampire, and nail it. However, a butterfly flies from the coffin and is captured by Živan. After running away with her, Strahinja discovers that Radojka became a vampire herself. He nails her and falls unconscious.

Kadijevic's "The She-Butterfly", also known as "The Moth", easily gained cult status as one of the few, refreshing vampire horror movies made outside the US. As such a rarity, it holds a strong reputation in the former Yugoslav countries, though, looking at it from today's perspective, it is not that scary anymore: in a nutshell, it has only three short horror sequences, two at the beginning and one towards the end, which are just there to give "back-up" for the middle 40 minutes of the film (out of its 63 minute running time in total) which are more humorous and casual; for instance, when the priest holds a cross when walking towards the mill and hero Strahinja exists completely covered with white flower, looking like a real ghost, even jokingly "coughing" dust. However, when those three scary moments show up, they really have some chilly mood, especially the already legendary one where the milestone stops and the vampire enters the mill to attack a sleeping miller. The ending seems confusing and "rough", yet Mirjana Nikolic is great as the main actress.