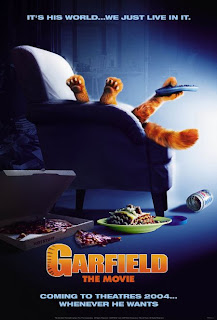 The lazy and fat cat Garfield is coiled Jon's pet. Garfield enjoys his life; he watches TV, bothers the neighbor's dog, makes friends with mice instead of catching them and steals Jon's food. However, recently Jon is bringing him to a veterinary often lately because he fell in love with doctor Liz. Jon gets a dog, Odie, who gets kicked on the street by Garfield. Odie then gets kidnapped by Happy Chapman, a TV host who wants to become a star thanks to him. Still, Garfield saves the dog while Jon and Liz fall in love.

After two masterworks - "Tootsie" and "Groundhog Day" - as well as critically acclaimed dramatic roles, comedian Bill Murray decided to take it easy for a while and picked a more relaxing, casual children's comedy based on the comic book with the same title about the fatest cat in the world. Even though the critics were proportionally too harsh towards the very solid "Garfield", it is still difficult to shake off the impression that the comic books were funnier and more subversive. The CGI depiction of Garfield is all right, though not too faithful towards the original design, whereas it wasn't really expected that a comic-book adaptation will be the new masterwork of cinemas anyway. The roles by Breckin Meyer and Jennifer Love Hewitt are thin and underwritten, the story unoriginal, though Garfield's charm can be sensed occasionally, like in the scene where the fat cat is pretending to eat a mouse but then just spits him out saying: "Blah! Have you tasted yourself lately?" or when he dances with Odie on two feet.