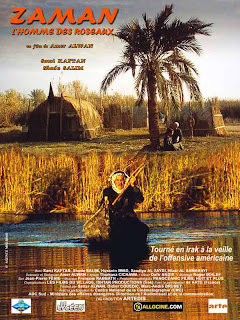 Zaman is an older man living along the shores of the Tigris river in the south of Iraq. Since his wife Najma couldn't have any children, they adopted the orphan Yasin. But now Najma is sick and the doctor advises her rest. Zaman takes his boat and starts his journey across the country to find the prescribed medicine, but no pharmacy has it. Finally, he finds it in one Christian hospital, but he doesn't have any documents to prove his medical insurance. In spite of the director's wishes, a woman employee gives Zaman the medicine. Unfortunately, when he returns, Najma dies, while Yasin comforts him.

Movies from Iraq are quite rare: up until 2003, the country produced only some 60 films in total. Another modest contribution to the modest cinema was "Zaman", a minimalistic drama so calm, quiet and spiritually inclined towards the Eastern philosophy that it seems refreshing compared to many loud, stupid and extroverted action films from the West. Shot with a home camera, with simple actors and accessible locations, Amer Alwan directs his debut film in the simplest possible way, never trying to make it seem something more than it is: a light 'slice-of-life'. Some of that lightness comes across as really too light, since the story consists just out of the hero going from town to town to find the medicine for his wife, yet the emotional touch gives it weight, as well as the sincerity that seems to arrive from some other dimension. Here and there Alwan can't resist but to "accidentally" film some street photos of Saddam Hussein and capture the radio news about the coming US intervention in his country, yet the political subtext practically doesn't exist since he only cares for the personal fate of his characters, as well as the nature that surrounds them, absent from any worries, embodied in some frames of the water birds or the hero washing his face with water from the river.