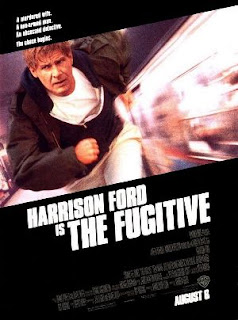 Dr. Richard Kimble, a succesful doctor, gets sentenced to death because the police thinks he killed his wife, though he claims he is innocent and that the real killer has a prosthetic arm. After the prison bus gets hit by a train, Richard manages to escape, shaves his beard and hides in Chicago and goes to find the real killer. At the same time, US Marshal Gerard is mercilessly prosecuting him. In the end, Richard finds out his colleague, Dr. Nichols, ordered the murder because he wanted to hide the side effects of a new drug. Gerard in the end becomes Richard's friend.

The movie adaptation of the Television series "The Fugitive" turned out to be an excellent thriller that still seems undated and fresh as upon it's premiere thanks to a fantastic rhythm from start to finish, displaying how Hollywood can really craft some amazing films if just a little effort is put in the material. The film impresses thanks to the brilliant chase sequences, a very realistic story and top notch direction, taking on a straight-forward approach and good 'old school' dramaturgy. Tommy Lee Jones really is great as the cynical US Marshal Gerard (for which he won an Oscar and a Golden Globe as best supporting actor and was nominated for a BAFTA), but the real star is the charismatic Harrison Ford, delivering a performance that's equally as smashing as it's unobtrusive. The story is filled with great little details, like when Gerard shoots a criminal who was holding one of his agents hostage - as a consequence, the agent survived, but the loud sound of the near gun caused his right ear to turn deaf for a while - but the most virtuoso directed sequence is the one where Gerard is chasing after Richard in a hospital, who manages to escape humorously by passing by a couple of police officers and telling them: "Officer, officer! There's a man in a blue jacket behind me, waving with a gun and threatening some lady!", who then mistakenly grab the angry Gerard while he gets away. Some subplots where the hero manages to hide and search for the murderer seem far fetched, but don't disrupt the film as a whole. Despite a big complexity, this film is almost perfect to the smallest detail.