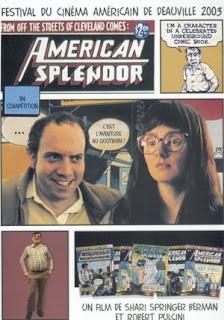 Harvey Pekar is an ordinary file clerk in a war veteran's hospital in Cleveland. He is a cynical pessimist who has a measly salary but loves to read comic books and meets Robert Crumb whose drawings he appreciates. Harvey eventually starts to make his own comic book, "American Splendor", in which he writes about his misadventures. Joyce, a reader of the comic book, sends him a fan letter and visits him in his apartment. The two of them fall in love and get married. Even though his comic books are praised, Harvey never became rich and remained a clerk until his retirement.

Lately, now that mediocre movies started to win Oscars on regular occasion, the true meaning of a truly creative project seems even more valuable. The modest biopic of the cult author of comic books Harvey Pekar, "American Splendor" is a little jewel and the most pleasant surprise of 2003, an accessible, calm, fun, funny and at the same time bitter and realistic achievement. It is truly strange that the screenplay of "The Lord of the Rings", full of dry dialogues, actually won the Oscar that year, while the shrill screenplay of "Splendor", full of such alive and daft moments was only nominated for that award. Already the sole exposition of the film establishes the odd touch: the opening credits are written in the form of comic book box whereas there's a drawn Harvey with a "bubble" dialogue that states: "Now they even made a film about me!" In one scene, while Harvey (Paul Giamatti) is walking through the street, the narrator is narrating: "This is the hero of the story...", just to have the camera switch to a recording room where the narrator is revealed to be the real Harvey Pekar (!), who is recording his words on a microphone. To make the thing even more unusual, the black and white, drawn Harvey in one scene talks with the (movie) Harvey.

The whole film is like that, a modest independent film full of surprises where the director duo Berman-Pulcini inventively play with the movie and comic book medium, and they seem to be aware that the smallest idea can sometimes enrich a whole film and make it seem even fresher. Here almost the whole film is filled with such little small ideas and touches that seem like additional spice to the film as a whole. Just take the very amusing character of Joyce (wonderful Hope Davis, who won the New York Film Critics Circle Award and was nominated for a Golden Globe as best actress) who is a big fan of Harvey's comic books. So she sends him a letter and visits him (!) in his apartment, where, after a while, her "idol" says: "I had a vasectomy". In his room, she starts talking nonsense, throws up in the toilette - and then asks him to marry her! That is such a smashing sequence all the way through, and the film would have lost so much if it wasn't there, which shows how creativity can come from the smallest interactions of characters. A shining film full of spontaneous moments, where not beaus but neglected outsiders are the main protagonists for a change.