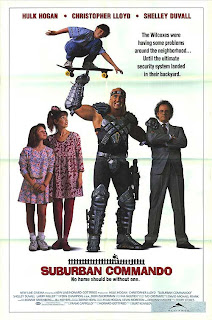 Evil General Suitor wants to rule the Universe, but interstellar hero Shep Ramsey destroys his spaceship. On his way to new heroic deeds, Shep's spaceship gets a malfunction and so he has to make a forceful vacation and land on his least favorite planet - Earth. However, by renting an apartment in a suburbia, he makes friends with his tenants, the neglected designer Charlie, his wife Jenny and their two kids, changing their lives. When it turns out that General Suitor is alive and wants to re-new his plans, Shep gets rid of him in an explosion and leaves Earth.

Some movies are forgotten, but still re-surface time after time thanks to their cult status. After he starred in a few disastrous films, the critics were pleasantly surprised with Hulk Hogan's science-fiction family comedy "Suburban Commando" which was refreshingly watchable, eventually remaining Hogan's best film - his cameo in "Gremlins 2" excluded. It's a matter of a sympathetic, though not especially inspired and mild family comedy that was not outstandingly well received around the World, but has some charm in exploiting the good old formula of a stranger arriving to a coiled community and changing their lives. It is a harmless fun with a few silly-childish gags, whereas the authors manage to ignite some sparks of competence here and there, like in the long establishing situation where the good-natured Charlie is annoyed by his egoistic neighbors who block his parking place with their open wheel car. Then he finds Shep's laser gun, turns it on and fires it out of pure curiosity to see what will happen. To his surprise, the gun truly fires a laser and makes a hole through his wall. He looks through the hole - and spots his neighbor's open wheel car on fire. Other jokes are also quite fun, like the cheesy one where Shep thinks a pantomime is trapped in an invisible force field so he "rescues" him and "breaks the force" by hitting him in the face, or the cleverly choreographed duel with the two bounty hunters. The observations by director Burt Kennedy weren't so poignant, which is why this is only a 'guilty pleasure', and the best job was done by Christopher Lloyd.