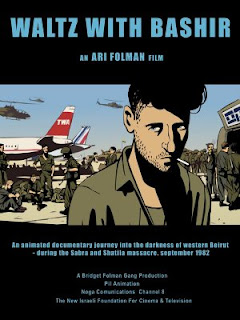 Tel Aviv. Boaz, a former soldier in the '82 Lebanon war, has nightmares about 26 wild dogs surrounding his home, which he sees as an allegory of the 26 dogs he killed when Israeli troops wanted to enter a Lebanon village unnoticed. His friend, Ari Folman, a director who also served in the war when he was only 19, listens to his observations and decides to interview his other colleagues. He meets with Carmi, Ori and others, as they discuss those days. Ari eventually remembers himself an incident that he has suppressed, the Sabra and Shatila massacre.

Ever since the mockumentary, numerous critics agreed on the fact that no new genres in the cinema have been invented. But "Waltz with Bashir" actually proves them wrong. If there was ever such a thing as an animated documentary with surreal fantasy elements (and on top of that shot over 20 years after the events it documents!), then it's this film, an extremely unusual, but wonderfully sincere, honest and open-hearted testimony of the writer and director Ari Folman who depicted his role and the roles of others in the '82 Lebanon War. You can analyze it from many different angles, but the human side in us somehow perceives it primarily as a personal confession of an artist's soul. The technical thing that stands out the most is how detailed the animation is: from the waves of the sea splashing to the shore, the apartment buildings, the faces of the protagonists, the shadows in the night, it almost reaches rotoscopic quality.

The story is very straight-forward and it thus seems somehow dry and too conventional at moments, which, together with a few pretentious and pompous scenes, comes off as the "Waltz's" biggest flaws. Luckily, Folman included a few refreshingly 'daft' touches that always avoid a grey atmosphere, the best being humorous ones: in one sequence, the IDF soldiers are shown when they think the whole war will be a picnic as they enter Lebanon, happily singing "Good Morning, Lebanon!" while their tank rolls over car after car on a road, while it even "scratches" a wall trying to take a curve in a too narrow street. In one virtuoso sequence, the soldiers shoot with tank shells and rockets to hit a red car with an assassin, but they miss it again and again, "accidentally" destroying all the buildings in the area, while one soldier even imagines his machine gun is a guitar and starts to play a song while war planes drop bombs in tune to his melody! All these are small humorous touches to somehow ease the heavy subject, yet it's always clear the dark-realistic mood prevails and just enhances the political message. Not many films address such topics, but this one does, and it does it with intelligence, which is why it won the Golden Globe for best foreign language film and was nominated for the Golden Palm in Cannes.