The Son of Kong 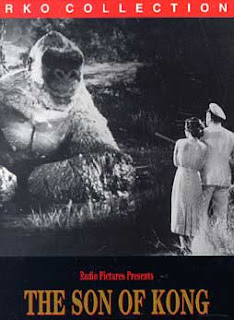 New York. After the disaster with Kong, filmmaker Carl Denham is practically sued by everyone. In order to get away from all the hate, he and the skipper leave in their ship for Dakang. There, the suspicious captain Helstrom persuades them to go back to Skull Island in order to find a treasure. Hilda, a performer, also secretly entered into their ship. When the crew starts a mutiny, the four of them and a Chinese merchant are left alone on the island. There Carl meets Kong's albino son, only 12 feet tall, and becomes his friend. When the ape helps him find a treasure, a giant earthquake sinks the whole island. Luckily, Carl, skipper, Hilda and the Chinese manage to find a ship on the Ocean.


"The Son of Kong" is to "King Kong" what Paris Hilton is to Paris. After the sensational success with "King Kong" in 1933, the producers quickly went on to cash in on the public and hastily crafted the sequel released the same year (!) - but it is obvious it is just a lousy, campy, kitschy flick that wants to cash in on the brand of the unique original. For a running time of only 69 minutes, the story uses its ingredients quite unproportionally - too much time is wasted on the establishing opening with soap opera relationship between Carl Denham and performer Hilda as well as the ship mutiny, actually almost 45 minutes. Which leaves only the last 25 minutes of the film for the title "protagonist" and all the other monsters we have been waiting for from the start. Some of the fantasy moments seem as if they were assembled from deleted scenes from the original film, but director Schoedsack still has some moments in crafting eerie mood and free imagination, like when a Syraccosaurs attacks the human heroes or the comical moment where the albino Kong fights with the giant bear, kicks his own head from a fall and makes some funny eye movement as if he is in a cartoon. The film seems arbitrarily, yet the great stop-motion animation special effects and the refreshingly straight forward approach still seem like virtues, making it a modest follow-up to the legendary original.