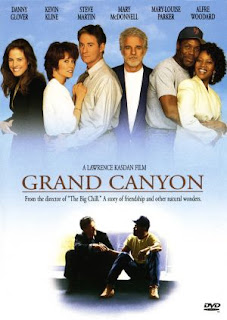 Los Angeles. Mack, who works in the immigration office, after returning one evening from a basketball game gets lost during his drive home whereas his car breaks down. Just when some muggers wanted to attack him, he was saved by Simon, the African American driver of tow-truck. Mack's wife Claire finds a baby on the street and decides to adopt it. Their friend Davis, a producer of violent Hollywood films, gets wounded in the leg by a robber. After recovery, Davis decides to shoot only gentle films, but then changes his mind and continues like usual. In the end, Claire, Mack, their children and Simon go to see the Grand Canyon.

The mosaic of several stories in the anthology film "Grand Canyon" is vaguely connected by the fact that the protagonists at the end go to see the canyon, though it's a moderately successful film despite the big problem that nothing changes in their lives which is why the story as a whole ends in entropy. It's a matter of a interesting and demanding, but conventionally crafted drama - the only originality is the dream sequence where in which Mack is flying over L.A. at night and in the end arrives at the picture of a naked woman that falls apart - which is why it's ambitions are sustained, without real stand-out virtues. The screenplay, nominated for a Golden Globe and an Oscar, is good, with a complaint that it queues numerous scenes in a superficial, short way, like Mack's flirt with a secretary when she takes his arm or the rather arbitrarily moment where Claire finds an abandoned baby on the road and adopts it. The best performances were delivered by Danny Glover and Mary McDonnell, but even Steve Martin got an untypical role of a bearded producer of violent films who decides to make pacifist films after he gets wounded by a robber, but in the end just continues as usual.