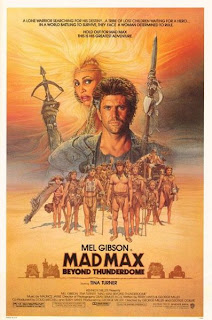 An aircraft pilot steals Max's vehicle in the desert. Max reaches a post apocalyptic town called Bartetown and demands entry to get his stuff back. He is brought to the female town ruler, Aunty Entity, who makes a deal with him: the town's energy is created by methane, fueled by pig feces, stored in the underground storage led by a dwarf, Master, and his strong henchman, Blaster, who challenge Aunty's authority with energy embargoes, so Max has to kill Blaster. During the fight in the Thunderdome, Max spares Blaster's life and gets expelled from town. He is found in the desert and mistaken for the messiah Captain Walker by a group of nomad kids who want him to lead them to the Utopian big cities, but Max explains they don't exist anymore. Some kids leave anyway, but Max finds them and is able to sneak into Bartetown and free Master from the dictator like Aunty.

The third and final installment of the popular post apocalyptic trilogy "Mad Max" is definitely the weakest, but it still has enough virtues to pass as an interesting film. Just like in the previous film, "Beyond Thunderdome" has also estranged itself a lot from the story of the original film, and the story here is truly chaotic and shaky: the first third, revolving around the backward-modern town Bartetown led by Aunty (poorly acted by Tina Turner) is typical "Mad Max" stuff with gritty details, like the clerk selling radioactive water or the underground power plant fueled by methane of feces of hundreds of pigs, and even though the motivations of the characters are confusing and some plot holes annoying, the thing has it's logic in portraying once again the primal, primitive actions of people on the edge of existence, something a lot of idealistic viewers would rather choose to avoid. But then the story shifts radically when in the second half Max is deported from town and finds himself in an oasis led by a tribe of kids who believe he is their savior - this unusual and sudden switch to a "Peter Pan" like plot is truly untypical and many "Mad Max" fans will find it too sentimental, but it's a welcomed and refreshing surprise because it has heart. The third act, that combines the first and the second story into one, is uneven but solid, executed with a few good chase sequences, even though the violence was rather trimmed down and more gentle than in the previous films - in one of them, a bad guy is hanging from a bar attached to the primitive train with which Max and the kids are escaping with. The bad guy avoids every obstacle when the train is passing on a bridge, dodging with his legs a few traffic signs, but just as he thinks he made it, a kid saws the bar and lets it fall down with him - and the final song, "We Don't Need Another Hero", nominated for a Golden Globe, is amazing.