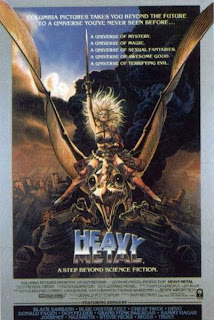 An astronaut enters a house and shows a girl a mysterious green crystal ball. But it's alive, melts him and introduces itself as Loc-Nat to the girl, proceeding to tell her 6 stories of it's influence on the Universe: in New York in 2030s, a taxi driver called Harry saves a girl who sells the green ball to aliens...Dan, a nerdy teenager, finds the green ball and gets transformed into a muscleman in the fantasy world Neverwhere...A space captain called Stern manages to avoid a trail at a space station when his henchman Hanover causes a commotion...The green ball transforms a couple of pilots into zombies...Some aliens accidentally take a woman from the Pentagon with them and she agrees to marry an android...Taarna, a tough warrior girl, avenges her race when she kills the barbarian leader who wiped them out and destroys the green ball...Back to the present, the green ball explodes and the girl transforms into Taarna.

"Heavy Metal" is one of those cult films that are so strange that it's impossible to describe it accurately to people who never saw it, without them getting a wrong idea of the film. Sufficient to say it's an animated film for grown ups made out of 6 short stories connected by the green ball that serves as a leitmotiv for evil, but not every story is equally well made, causing it to seem unbalanced, or in some cases unfinished. With an extravagant flair, "dirty" patchwork style and extreme self confidence, the authors delivered a daring film that pushed the boundaries and rules set for animation in that time, obviously causing a great influence on the future Japanese animated features for adults. Out of the 6 stories, the first and the last one are arguably the best: the first, set in New York in the 2030s, somehow looks remarkably like Besson's "The Fifth Element" since it follows a cynical taxi driver, Harry, who helps a damsel in distress. In one scene, a robber gets on the back seat of his car and tries to rob him, but Harry simply pushes a button which causes a laser to disintegrate the thug. As Harry enters a police precinct, he spots a prostitute and says: "Kiss my ass!", and she replies with: "For 20 $, I'll do it!" There is even a scene where Harry and the woman have intercourse, which reaffirms the film's adult tone. The last story, revolving around a confident woman warrior, Taarna, taking revenge in the post-apocalyptic future, is campy but remarkably animated, in fact, it is animated so well it creates a unique rhythm for itself. The scene alone where a naked Taarna slowly dresses up in her black leather costume is almost hypnotically stylish, reaching almost the mood similar to noir films. There are also other fantastic scenes present, like the bird flying over a giant crater in the desert and passing through a giant skeleton of a dead dinosaur, but the mix between violence and animation will cause some to become nauseous, while it's a pity the cool Taarna doesn't say a single word during the whole story. "Heavy Metal" is a influential film, but not that good and magical as some say it is.