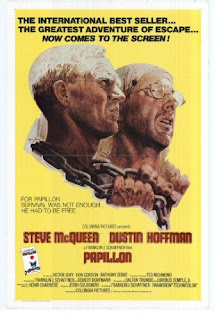 French Guiana in the '30s. Henri Charriere, called Papillon because of a tattoo on his chest, is convicted for a murder he didn't commit and sent to the Devil's island. On the ship he meets Louis Dega, a forger who double crossed a mass of people for their savings, and becomes his bodyguard and friend. Unbearable heat surrounds the island so Henri organizes a boat to escape from some butterfly merchant, but shows up a weak earlier so he ends up in the solitary confinement for 2 years. But Henri doesn't give up so he tries to escape once again in a boat, taking this time Louis with him. Still, he ends up on the shore of South America and gets another 5 years of solitary confinement. He finally escapes on a sack on the sea.

Biographical drama "Papillon", nominated for a Golden Globe for best actor (Steve McQueen) and for an Oscar for best music, is an unfocused film with such a bleak story that it kills it, depriving it from any charm or life. It's a bitter prisoner drama based on real events and director Franklin J. Schaffner concentrated on displaying the lives of prisoners in a cold and objective way, avoiding any emotions: the guards are sprinkling them with a hose through the bars, the main hero looses his tooth from vitamin poor food, a fugitive's head gets decapitated with a guillotine and it's blood suffuses all over the the camera lens...The heavy theme of a hell in jail is handled appropriately, realistically, but without inspiration, and the brutality is just there shock. In one hypothetical sequence Henri is dreaming he is walking through a desert while some court sentences him for uselessly wasting his life - if at least there were more such shifts from the conventional display of the depressing story because the overstretched running time of 150 minutes doesn't work as it's supplement, neither the many useless escape efforts from the main hero who fails again and again and again. "Papillon" is a solid an interesting film and inevitably many will find it pleasing since it shows the darker side of life, somewhere beyond the reach that exhausts the viewer.