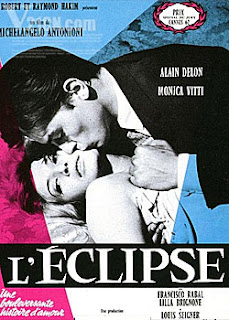 Vittoria is tired and bored from everything in life. Since she doesn't feel anything, she breaks up with her lover Ricard who asked her to marry him. Out of boredom she visits the neighbor in nearby apartment who tells her that Kenya is the most beautiful country in Africa. Later on she aimlessly wonders through a stock exchange headquarter or flies in an airplane with her friends. She meets Piero, a broker, and starts a relationship with him, even becoming happy for a moment, but even that soon becomes boring for her.

Psychological art-drama "The Eclipse" is another excursion of director Michelangelo Antonioni into the rarely discussed themes about the fragility of human relationships and growing emptiness and boredom of life of the protagonists in the modern society, but the author once again got stuck in the boring philosophical meandering and showed why his Italian colleague Fellini is much more famous today. Admittedly, the exposition of the film is fascinating: in it, the main heroine Vittoria and her lover Ricardo are watching each other for minutes in the increasingly intolerable silence before she finally speaks up, announces she is breaking up with him and goes out of the house. The film, which won the Grand Prix at the Cannes film festival, is remarkable for it's bravely depressing plot where Vittoria is bored with life and can't find anything that interests her and for Antonioni's classic long takes that make the viewer contemplate. Even later on, interesting details show up (Vittoria and Piero "kiss" each other through the glass of the window) but with time the story looses it's initial spark and becomes, just like the heroine's view of life, more and more senseless, nebulous, exhausting, difficult and empty.