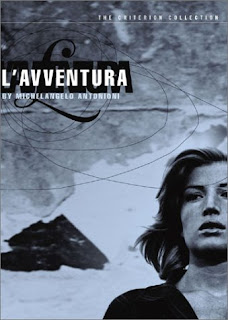 Rome. Anna is a rich woman having a shaky long distance relationship with the architect Sandro. One day she drives with her friend Claudia to his home and sleeps with him. The three of them take a boat trip together with their friends Giulia, Raimondo and Corrado to an isolated volcanic island near Sicily. As they were daydreaming, they suddenly notice Anna has vanished without a trace. They search for her and contact the police, but without any success. Since he is now without a girlfriend, Sandro starts a relationship with Claudia, who refuses at first but then accepts later. Together they search for Anna in various cities and settle in a hotel. A bored Claudia suspects Sandro found her, but just spots him in the arms of another woman. She runs away, but meets him again, apathetic on the roof top.

"The Adventure" was Michelangelo Antonioni's breakthrough film that remained one of his most popular ones throughout his career. It's one of his typical psychological existential art dramas that daringly speak about the ultimate taboo subject - the emptiness of life. To bring his point across, Antonioni once again placed emptiness into the film itself, creating a dead void that deliberately increases the bleak feeling, something that doesn't work very often. In the exposition, the main heroine, Anna, is seemingly introduced. Together with her friend Claudia and boyfriend Sandro they take a boat trip, where the director places a few neat details here and there (during the fast sailing of the yacht, Sandro drops his newspaper into the sea page by page; some of the passengers jump into the water before the yacht stopped). Once on the island, Anna is bored and admits to Sandro: "I don't feel you anymore". Other neat details are shown ( waterspout on the horizon of the sea). Sometime later, she disappears without a trace on the island. From there on, the film introduces the mystery that is deliberately left unanswered, which gives it that special spark of "unreachable", but in a way it isn't a mystery as much as it is a metaphor - Anna's existence became so empty and boring that as if she stopped to exist.

From there on, the supporting heroine Claudia becomes the main heroine and takes her place when she starts a relationship with her boyfriend Sandro, but the film actually deals with the inability to exist, the fear of loss, the distance between people and the search for something that never passes. In one scene later on, Claudia is happy with Sandro, joyfully teasing him: "When I'm not around, you have to feel as if you miss your leg, as if you wanted to hug my shadow", but later on she finds out she too is replaceable with some other woman, which once again reaffirms the film's theme about isolation and transience. In the second half, the film slowly looses it's power and becomes slightly boring at times, but Antonioni never looses his author's perspective and offers some thought provoking questions: did Anna exist at all? Were Anna and Claudia the same person? Is she forgotten? What if every person is an island and isn't able to connect with someone else? "The Adventure" is not flawless by any means - actually, it does posses quite a few flaws, from the overlong running time up to the cold mood, yet it's always nice to experience a different film, to sink deep into a thinking that's completely different from ours, that works subconsciously instead of reaching for loud and fast gimmicks. Maybe a lot of modern day audiences should try something new, some more profound kind of film, a one that's not older than 10 years, and not just give up after 5 minutes if they find it "incompatible" - maybe then old films like "The Adventure" wouldn't just disappear without a trace, as if they never existed in the first place.