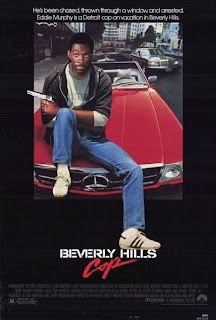 Detroit policeman Axel Foley is shocked when his friend Mikey is killed outside his apartment. In order to investigate the trail, which leads him to Beverly Hills, Axel fakes he is taking a vacation there and meets his childhood friend Jenny, who works for the rich art dealer Victor Maitland. Axel suspects Victor is behind the murder, so he secretly collaborates with local police officers, Billy and Sgt. Taggart, who were given orders to watch him. They soon discover Victor is smuggling drugs and bearer bonds in his warehouse, but have no evidence. When Axel gets captured, Billy rescues him and they proceed with Taggart to start a siege of Victor's mansion. They kill Victor and Axel solves his case.

"Beverly Hills Cop", an enormous hit and icon from the 80s, is still a sly and amusing action comedy with a rather realistic cop story. The combination of serious crime elements and lowbrow humor, violence and innocence, complexity and simplicity, hard mood and relaxed silliness both have it's flaws and virtues, and despite the fact that the connecting tissue of the plot doesn't have much sense, the whole film is just a platform for the brilliant comic performance by the excellent Eddie Murphy, who was here nominated for a Golden Globe as best actor in a motion picture musical or comedy. Some of his improvisational scenes, like the one where he asks a security guard for a match in Victor's warehouse and then pretends to be some classy custom inspector who complains about the working conditions and demands to see the confidential documentation or the one where exaggerates by praising Sgt. Taggart and Billy in front of Lt. Bogomil by calling them "super cops who are just missing a cape", is one of those small Murphy classics. And Judge Reinhold is also great in his small comic role as the naive police officer Billy. The film is dynamic, charming and raw, but slightly standard, heavy handed (the whole Mikey subplot, who is suppose to be Axel's "super pal" even though he is a crook, is really lame), primitive and too "mainstream", yet still undoubtedly good: when compared with some later disastrous Murphy comedies, the tight and fluid "Beverly Hills Cop" really looks wonderful.