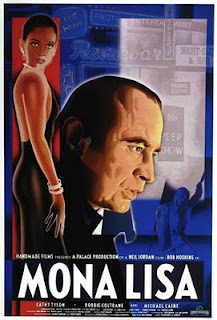 After spending seven years in prison for him, George returns to his former crime boss Mortwell, now owner of a night club, who gives him a small job out of pity: to drive prostitute Simone from one client to another. George has troubles returning back to his world: his ex-wife doesn't allow him to see his daughter while his friend Thomas is obsessed with novels. George falls in love with Simone and decides to search for her friend, Cathy, who is also a prostitute. When he saves her, it triggers an angry backlash from Cathy's pimp Anderson and Mortwell. They are both shot by Simone, but George is disappointed when he realizes she never loved him, but instead only cared for Cathy.

"Mona Lisa" seems as if director and writer Neil Jordan saw so many movies where a couple ends up happily ever after that he decided to make an entirely different take on it: a large part of the audience was disappointed by the "dead end" of the story, yet when one has the main theme in mind - namely that the main protagonist George is a tragic figure, an outsider who loves and adores prostitute Simone, but cannot understand her nor "fit in" into her world - then the perspective is shifted and that flaw suddenly seems like a virtue. Not since "Vertigo" or "Brief Encounter" was there ever such a bizarre tale of unrequited love. Bob Hoskins plays the leading role entirely natural, to such an extent that we could truly believe that his George is one of those "thugs from the streets", switching from cheap-dirty when it is required to be and then to noble when even that is required (the elaborated sequence where he wonders London's night clubs in search for Simone's friend Cathy in order to save her from the "underground" is reminiscent of "Taxi Driver", but is somehow more emotional because the song "In Too Deep" by Genesis almost makes it seem like Orpheus is descending into an evil world to rescue someone), for which he won several awards. Unfortunately, "Mona Lisa" is indeed rushed and heavy handed at times, especially towards the hectic finale, which is why Hoskins was still better in the more harmonious cult crime "The Long Good Friday". Actually, the story seems like a prelude to Jordan's later superior film about "impossible love", "The Crying Game", yet as a whole it flows naturally and is indeed elegant.