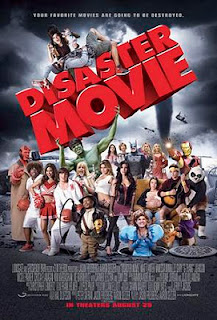 Will has a dream about the upcoming end of the world. Suddenly, while on a party, an earthquake hits the city whereas meteors start falling from the sky. His friend Lisa is crushed while his other friends Calvin, Juney and a demented Enchanted Princess roam the streets in order to find his girlfriend Amy, trapped in a museum. Everyone is killed, except Will who saves Amy and subsequently the world when he inserts the crystal skull at the altar.

It is too easy to just simply attach the eponymous adjective to the 2008 parody "Disaster Movie", which was pretty much done by almost every critic, yet directors and screenwriters Friedberg and Seltzer really did not improve their "style" in any way since the catastrophic "Date Movie", but delivered just another forced, empty, chaotic, deformed and self-defeating mainstream comedy without humor. Even "Kung Pow" and "Wild Zero" are entirely dazed and insane comedies, but at least they are comedies with humor. "Disaster Movie" is simply embarrassing to sit through and causes more damage to the brain than Bisphenol A or phthalates. Though, at least three jokes were decently funny: the one where Juno observes a guy wearing only underpants in front of her and calls him "Battle-crotch Galactica", the fight between a pregnant Juno and Carrie Bradshaw who is actually a long-faced man and the naked Beowulf sequence. Yet, when one has in mind that everyone can, by pure statistics, accidentally stumble upon 2-3 funny jokes out of 100 attempts, those three good jokes do not compensate for the 96 % of the remaining story, which is "garbage humor". Contrary to the popular belief, I must give a dissident opinion about the small role by Kim Kardashian as Lisa since she actually gave an honest and sweet performance. But since her character and that of Juno were eliminated so early on in the story, it just shows that the authors cannot even pick right characters for their movies.