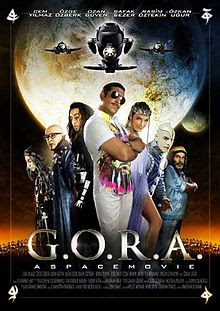 Carpet salesman Arif is notorious for his counterfeit photos of UFOs. However, one day, as he was trying to sell a carpet to prince Charles, he was abducted by a real spaceship, together with a dozen other Earthlings, and deported to planet G.O.R.A. by the selfish commander Logar. He wants to enslave humans because he still has a grouch against them since an incident in 1789, when his grand-grandfather was harassed by a Turkish peasant after landing on Earth. Logar wants to marry princess Ceku, but she falls in love with Arif and helps him and robot 216 and a certain Bob Marley Faruk escape from prison. Ceku is later on abducted by Logar, though. However, Arif manages to film Logar in incriminating position and thus marries Ceku and returns to Earth.

A Turkish version of "Spaceballs", "G.O.R.A." quickly seized a cult reputation by the sheer fact that any movie outside the US and Britain of the science-fiction genre will instantly stand-out as something unusual - it became one of the highest grossing Turkish movies of the decade, though failed to attract an audience in other parts of the world, since the humor is very "Turkish" and thus confined to that area - and is a silly, wacky and dazed spoof, yet consistent in its set-out tone. Just like in Brooks' aforementioned film, actor and writer Cem Yilmaz (in a double role, both as the good guy Arif and the main villain Logar) achieves the most positive points when it aims at a more elevated kind of humor, such as the creative opening when Arif is shown as such an exaggerated UFO photo fraud that not even Billy Meier would be ashamed off his tactics or when he gives satirical jabs at the American dominance over any other country (i.e. in the "in medias res" opening in the spaceship, every crew member is talking in English, until all of a sudden someone suggests to "switch to Turkish" language, which they all do, gently ridiculing the cliche that every movie alien has to speak in English; at a desert G.O.R.A. market, Arif wants to bribe an alien by giving him some dollar bills, but he declines because they are "worthless". However, when Arif gives him some Turkish money, the alien happily accepts). The movie is indeed terribly overlong at a running time of over 120 minutes, some cheap attempts at jokes are disastrous whereas the supporting character of Bob Marley Faruk is entirely useless, yet the surprisingly solid special effects and Yilmaz's enthusiasm lift it up a notch, especially in the hilarious sequence where planet G.O.R.A. is threatened by a "ball of fire" from space, and his Arif just shouts: "This is just like in that movie, "The Fifth Element"! You know, with Willis!", but nobody seems to have heard about it.