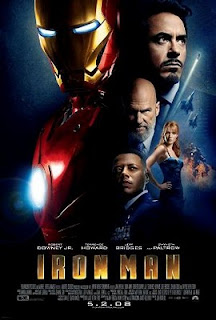 Iron Man; science-fiction action, USA, 2008; D. Jon Favreau, S: Robert Downey, Jr., Jeff Bridges, Gwyneth Paltrow, Terrence Howard, Shaun Toub
Tony Stark, a spoiled and prodigal billionaire and head of a L.A. based weapons company, is forced to change his view on life when he gets captured on Afghan territory by warlord Raza who wants him to make a powerful rocket for his militia. Teaming up with another captive, Dr. Yinsen, Tony is able to escape by building a robust exoskeleton. Following his announcement that he will not be making weapons anymore, his partner Obadiah has a major clash with him, which results in fighting between the two of them in two exoskeletons. Tony wins, falls for his secretary "Pepper" and announces that he is Iron Man.

The live-action adaptation of one of Marvel Comics most famous superheroes, "Iron Man" turned out to be a much more sympathetic film thanks to director Jon Favreau than it would have been in some other director's hands since the CGI overkill, cliches and pompous ideas were avoided and toned down to the minimum, though, obviously, it does not reach some higher artistic-quality levels or expand our mind, which is why the hype of the critics was rather exaggerated. The sequence near the start, where Tony Stark (very good Robert Downey Jr.) escapes from the Afghan cave in his exoskeleton, is truly unusual and refreshing since mixing a superhero milieu with a Third World country was something rarely done before this, numerous jokes are flat yet effective, Jeff Bridges is more than solid as one of the two bad guys in the story, the hidden critique of the weapons industry and its detachment from victims of their products is surprisingly subtle, almost poignant, though it wouldn't have been bad for the movie to insert more examples of genius moments, such as the surprising, completely untypical moment when one of the two bad guys eliminates the other. Elegant and accessible, "Iron Man" is a fun, though standard edition of the super-hero genre.