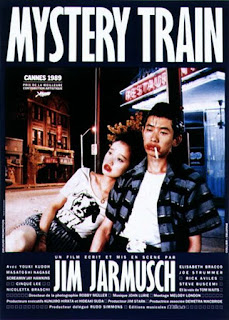 A young Japanese couple, Mitsuko and Jun, visit Memphis since she is obsessed with Elvis Presley. After touring Sun Records, the two tourists decide to stay at a hotel over night. In the morning, they hear a gunshot... An Italian woman, Luisa, is stalked by a strange man on the street, so she decides to spend the night in the same hotel, sharing her room with Dee Dee, who just broke up with Johnny from England. Luisa sees Elvis' ghost in the room... Annoyed by losing his job, Johnny robs a liquor store and shoots its owner. His colleagues, Dee Dee's brother Charlie and Will, thus become his unwilling associates and hide with him in the same hotel. In the morning, Charlie gets wounded when he stopped Johnny from shooting himself.

Jim Jarmusch's fourth film, and his first in a Japanese co-production, "Mystery Train" is another minimalistic cult achievement aligned towards his style and trademarks: an intentional de-dramatization of story (as opposed to numerous mainstream films who always tend to over-dramatize plots), realism, slow rhythm and a foreigner's view of America (ironically, in all three stories, the protagonists are either Japanese, Italian or English citizens). One untypical structural innovation for him, though, are three stories told at the same time, at the same hotel, just in different rooms and with different characters. The first segment is arguably the best: revolving around a young Japanese couple, Mitsuko and Jun, who visit Memphis almost as tourists who visit a cultural heritage of some long gone civilization, as Jarmusch puts it, is elegant, moody and funny (the "Elvis would have weighed 648 pounds on Jupiter" line; the scene where Mitsuko kisses Jun in order to draw a "smile" on his lips with her lipstick; the genius idea of Mitsuko being so obsessed with Elvis that she made a photo album of his picture that resembles the picture of Buddha). However, the second and the third story do not manage to repeat the same level of frequency due to a lack of point or underused potentials. The scene where the ghost of Elvis shows up is especially out-of-place whereas the third story finally gives the clever revelation of who fired a shot (which was heard at the end of the first two stories), yet the sole story goes nowhere and is lost in a dead end. Especially comical is Hawkins as the hotel manager who never moves from his seat during the entire film.

Indeed, the first of the three is genious. I think the second one is the weakest, on the basis of having great potential and wasting it.

But still, I really dug this one.

Agreed, the first one was my favorite, too. The other two were also good, but not as strong.