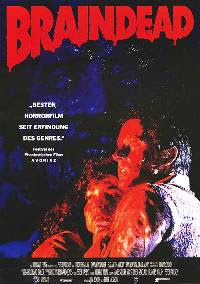 An official manages to transport a mysterious and cursed monkey from Sumatra to the New Zealand Zoo. Wellington. After her mother prophecies the love of her life, the shy clerk Paquita decides to start a relationship with the clumsy Lionel, who lives with his dominant mother Vera. While spying on them, Vera gets bitten by the Sumatran monkey and thus squashes it. However, she soon becomes a Zombie. Lionel, determined to keep it a secret, fakes her funeral and keeps her at his place. Still, since she attacks others, the house is soon found under siege by hundreds of Zombies. Using his lawnmower, Lionel grinds all the undead and finishes off his giant, mutated Zombie mother by throwing her into the burning house, also discovering that she killed his father after he had an affair. He thus starts a new life with Paquita.

One cannot really complain at the lack of intelligence in a movie that calls itself "Braindead" nor can one pin down that it is exaggerated without limits when it already sets up its own internal logic of 'over-the-top' right from the start, yet this homage to "Evil Dead" and its aesthetics of "impossible" blending of slapstick and hard horror cannot avoid the flaw of empty "shock for shock's sake", since it seems like Peter Jackson back then followed the rule that the best way to make your film stand out when you are an unknown film maker (and on top of that in an "unknown" cinema of New Zealand) is to gain attention by simply being controversial without limit. Unfortunately, while this cult film indeed crosses every limit of controversy (necrophilia, scalping, mutilation, acrotomophilia...), it does far less so with crossing the limits of quality. Jackson copes the best in the first half of the movie, when he establishes a stylish mood (with the creepy opening in Sumatra when the two explorers are running through a narrow canyon or unusual camera angles) and genuinely funny moments, both with sympathetic innocent jokes (like when Paquita's dog jumps over the fence and lands on the clumsy Lionel) and even more grotesque ones (such as when Lionel's mom, after being bitten by the Sumatran monkey, squashes its head with her heel - the scene would have otherwise been disturbing, but since the monkey's head is so obviously a fake puppet with "button-eyes", it actually has a comical effect).

Nonetheless, while the humor was natural in the first half, it turns forced in the second. Jackson crammed so many Zombies and splatter violence there that it numbed not only the viewing experience but also the characters: the best example is the character of the priest, who is hilarious when he says "I kick ass for the Lord!", but as soon as he transforms into a Zombie himself, becomes just a boring extra who doesn't stand out in any way anymore and you don't even register him among the Zombies. Likewise, the Zombie baby segment is disastrous, perverted and stupid in trying to make fun of infanticide: even when you make a movie about bad taste, you must have at least some taste. "Braindead" is indeed at least 30 % garbage, but it has that sheer enthusiastic energy of a young author as well as a hidden message that almost gives more meaning than an other edition of the genre: Lionel, whose life is dictated by his over-dominant mother, has to become independent and stand for his "forbidden love" with Paquita. Symbolically, he has to break free from the past, get over his suppressed family secret, his burden, and move on to live in the present. As such, Paquita is a symbol for the romantic genre while his mother for the horror genre, and he must choose which he wants. The finale with killer intestine and others is a spectacle of the strange, which is why the movie is almost never shown on TV, yet the story in the 2nd part still longs for the humor from the opening, which is only found in small crumbs, such as the performance of uncle Les who acts as if Rodney Dangerfield got lost in a Zombie movie. Too much gore, too little sophistication.