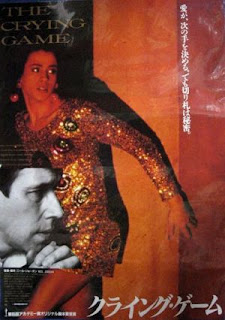 Fergus, Jude and Maguire - members of IRA - kidnap British soldier Jody. They threaten the British authorities that they will execute him if one of their fellow IRA members isn't released. Jody becomes friends with his guard Fergus and persuades him to take care of his girlfriend Dil if anything happens to him. While trying to escape, Jody is accidentally killed by British tanks. Fergus hides in London and finds Dil who works as a hairdresser. He falls in love with her and they start a relationship. But one night Fergus discovers that Dil is - actually a man. Disgusted, he breaks every contact. But he can't resist not to re-new the relationship. In a conflict, Dil kills Jude but Fergus takes over the responsibility and lands in prison.

In some movies, plot twists became so famous and influential that the viewers found out about them even before they saw the sole movie themselves, which extracted a dose of magic and mystery away from them. Such a destiny was attached to love drama "The Crying Game" which contains probably the biggest public secret which happens somewhere in the middle of the film. Really, unwillingly, I found out about the plot twist at least 3 times in various newspapers before I actually saw the film. Still, luckily, the story works good even for itself because it's a refined essay about unconditional love that traverses all obstacles, search for identity and insight into the life of a terrorist who meets the victims of his deeds and thus changes. Jaye Davidson is phenomenal in the role of Dil, but Stephen Rea also did a good job, which is why the film works as a whole despite a few ungainly-forced moments. The screenplay won an Oscar and a New York Film Critics Circle Award.