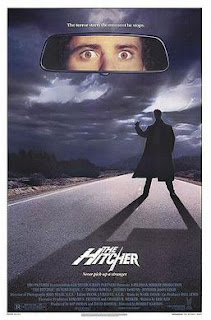 During one night of his long car trip, Jim Halsey picks up a hitcher along the road, John Ryder. But Ryder turns out to be a psychopathic serial killer, and Halsey barely manages to throw him out of his car. However, along his trip, Halsey keeps encountering Ryder, and spots a family massacred in their car. Halsey stops at a diner, makes friends with the waitress Nash and calls the police. However, the police arrest Halsey, since Ryder framed him for the murders. When Halsey wakes up in the jail, the notices that everyone in the entire police station was killed by Ryder. Halsey flees and teams up with Nash. They stop at a motel, but Ryder finds them and kills Nash by pulling her in two parts with a running truck. Ryder is arrested, but flees. Halsey finds and shoots him.

There seems to have been a discord in "The Hitcher" between what the screenwriter Eric Red intended to make and what common sense should have incited him to actually make. Red had a good basic idea about a hitcher who persecutes a young driver, imbibing it with some 'Hitchcockian' moments of helplessness: for instance, after picking him up in the car, the hitcher hits Halsey's right leg and thus also hits the gas pedal, in order for them to quickly pass one abandoned car on the road, until the hitcher later on admits he killed the driver in the said car. In another, Halsey spots the hitcher in the back seat of a family car, and thus wants to alert the family to kick the hitcher out of their vehicle, but to no avail. The aesthetic cinematography also helps at building up the mood. Unfortunately, instead of the entire film following this direction, it quickly sails into such illogical waters that it can make the viewers' dizzy. It namely introduces a subplot where the hero Halsey is framed for all of the murders, as he becomes an epic scapegoat, giving the hitcher practically supernatural powers. When Halsey calls the police, they actually arrest him—even though it makes no sense. It turns out that the hitcher stole Halsey's ID and placed it among the corpses, but that was never previously established in the film, not in a single frame.

Halsey later wakes up inside the jail, pushes the door—and finds out it is unlocked. As he walks inside the police station, he finds all the officers massacred. Several problems right there. How could it be that he didn't hear anything while sleeping in his jail cell? Was he drugged by the hitcher? Why did the back-up police show up right then when he woke up? Later on, upon spotting two police officers, Halsey threatens them with a gun and forces them to enter the police car and drive him inside. Would an innocent man react this way? And just as Halsey was about to give himself in, the hitcher shows up out of nowhere, in a van, and shoots the two police officers, thus framing Halsey even further. Not even "Tucker and Dale vs. Evil" had such an impossible timing at being at the wrong place at the wrong time. The hitcher shows up everywhere, anytime, to such an extent that this becomes an elision of common sense. Two or three such lucky entrances could have been tolerated, but to show up like this always at the right time and at the right spot, that is ridiculous. When Halsey and the girl, Nash, are in the motel, far away from the places of the events, the hitcher shows up in the middle of their room. How? If Red had any sense for realism, he would have either tried to explain this or write something else. Take for instance Carpenter's "The Ward": the serial killer inexplicably appears always near the heroine, until it is revealed he is just a split personality of the heroine herself. If it would have been revealed that the hitcher was just a split personality of Halsey who is suffering from Schizophrenia, this could have helped in amending these flaws. During its premiere, "The Hitcher" was attacked by the critics for all the wrong reasons. It is not that "The Hitcher" is too violent. It simply that it is too implausible.