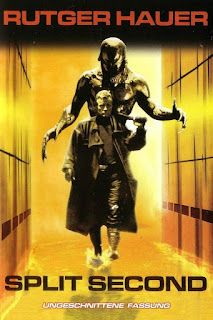 London in the future is semi-flooded due to global warming. Cynical police Detective Harley Stone is searching for a bizarre serial killer who rips the hearts of his victims. Harley is annoyed that he is assigned to a new partner, Durkin. One day, someone delivers suitcase with a ripped hearts inside at the police precinct. Harley had an affair with Michelle, the girlfriend of his ex-partner Foster, who was also liquidated by the serial killer, but Harley broke up with Michelle. Harley and Durkin find the serial killer in an underground subway, and find out it is a demon. Harley rips the demon's heart out and shoots it.

A strangely underrated flick, this independent syncretism of "Sam Spade meets the Predator" works thanks to a good futuristic mood established thanks to a few aesthetically photographed images, fast pace and an actually interesting protagonist, the cynical Detective Harley, played by the excellent Rutger Hauer. Harley in "Split Second" acts almost as if he is in his own reality—upon trying to enter a night bar, a dog barks at him, but Harley just holds his badge in front of the canine and says: "Police, dickhead!" His new police partner, who is annoyingly "by-the-book", Durkin, compulsively cleans the lights on their police car, but Harley then just sticks his bubble gum on the glass. In another amusing moment, the police officers are speculating at who the mysterious cannibalistic serial killer might be, and Harley adds: "The only thing we know for sure is that he is not a vegetarian!" These auto-ironic moments give "Split Second" charm and wit, yet it still has flaws. For instance, why is the film set in the future? Why not in the present? The global flooding subplot leads nowhere. The viewers probably assumed that the demon serial killer might be connected to some sort of ecological forces taking revenge on humankind, yet that potential was unused. Harley's connection to the demon is also left unexplained, as is the creature's sole existence, which shows that the script was rewritten as they went along, and was left without a final point that connects all these threads. Despite its omissions and shortcoming, "Split Second" is still a much better film than its forgotten reputation hints at.