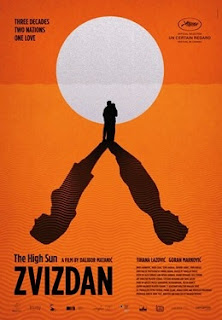 Three stories set in the Dalmatian hinterland. 1 9 9 1: Croat Ivan is in love with Serb girl Jelena, but Slobodan Milosevic is supporting the creation of the pseudo-state Republic of Serbian Krajina in the area. As the war is imminent, Jelena is abducted by her brother, a paramilitary, and brought to their village in a car. Ivan wants to see Jelena, but her brother kills him... 2 0 0 1: Nataša and her mother, Serb refugees, are returning, and Croat handyman Ante is helping them assemble the abandoned house, but Nataša hates him because her brother was killed by the Croatian army. Passion prevails and they have sex, but Nataša does not show interest in him staying, so he leaves... 2 0 1 1: Luka visits the home of his ex-girlfriend, Marija, with whom he has a child, but whom he abandoned on the insistence of his family because she is a Serb. He has a chance to have sex with another girl at a party, but declines and returns to Marija's home. She exits the house, sits next to him and then gets back inside, but leaves the door open.

Similarly as Mančevski's "Before the Rain", director Dalibor Matanic assembled "The High Sun" as a triple anthology of stories which all have the similar theme of ethnic conflict, but decided to set them all in a Romeo & Juliet concept and have the two actors—Tihana Lazovic and Goran Markovic—each play three different couples in the three time periods of the film. Matanic crafts the three love stories as a Schrödinger's cat experiment, contemplating if the Croat-Serb love couple could have had a hypothetical chance of succeeding if it were not set in the middle of the Croatian War, but during another time era, and thus "resets" Lazovic's and Markovic' romance to square one in the next decade, and the decade after that. Matanic, usually known for grotesque ideas, is untypically serious and honest in this edition, trying to establish a "raw" meditation on tolerance, though his dialogues are too routine and schematic at times, lacking more inspiration. The first story, set during the war, takes too long until it gets going, but has a strong point in the sequence where Ivan is playing on his trumpet nonstop, trying to persuade the Serb paramilitary to let him pass a checkpoint to see his girlfriend. The second story is equally as good, revolving around Serb refugees trying to integrate back, and culminates in a very passionate moment: Nataša is lying on her back, with her feet going up and down on the wall, until she stands up, kisses Ante and has sex with him in the house. The third story is the weakest, as if it lacks that raison d'etre since it has no real threat or obstacle for the Croat-Serb couple, though one can argue that Matanic was contemplating that the couple was interrupted during the war, and then post-war era, but that they do not have any more (external) excuses for failing in the third story anymore, and that all is now left on them. Despite omissions, the film has more to it than the typical social issue bait.