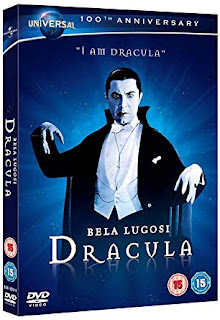 Transylvania. Solicitor Renfield travels in a carriage to the castle of Count Dracula for a business agreement, in spite of warnings from locals in a village. Once in the castle, Renfield signs a contract leasing a real estate to Dracula. However, Dracula is a Vampire. When their ship arrives at London, all the crew is found dead, while Renfield, the only survivor, is sent to a mental asylum led by Seward. Dracula appears and starts killing people by drinking their blood, but also finds Seward's daughter Mina attractive. Dracula puts Mina under his spell and brings her to his estate, but Renfield brought Harker and Professor Van Helsing to the place. As the dawn approaches, Dracula goes to sleep in the coffin, and Van Helsing takes the chance and kills the Vampire by impaling its heart.

Rarely has a villain left such an enduring memory in the history of cinema as Count Dracula in Tod Browning's eponymous 1931 film, in which Bela Lugosi delivered a career high performance. It has been copied, imitated and spoofed for decades after its premiere, and thus it is amusing to see the original before it was "spoiled". The movie itself does not seem that fresh anymore: the first 30 minutes are excellent, conjuring up a deliciously creepy mood thanks to expressionistic cinematography, locations (the sequence where the carriage is traveling on a "mountain bridge" to Dracula's castle up on the hill), details (when a coffin opens up for the first time, and a hand emerges from it, there is a cut to a rat turning away, as if the rodent itself is disgusted by it) and Dracula's appearance itself, but once the movie switches to London, the remaining 45 minutes slowly but steadily lose its steam, faltering until it ends in an anemic anticlimax ending. The characters of Mina and Harkin are just shoehorned in the story, it seems, and their overlong dialogues dilute the suspense. "Dracula" is a classic of early horror, yet Murnau's earlier 'pirated' film "Nosferatu" seems much fresher and inventive today.