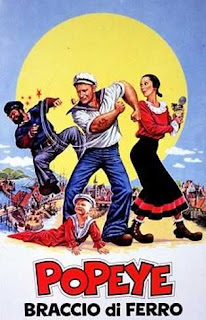 Popeye the sailor arrives in a boat to a small coastal harbor town in search for his long lost father. He decides to stay at a boarding house owned by Olive Oyl, who changes her mind at the last moment and refuses to marry the brute Bluto. Popeye and Olive find a baby and adopt it. Popeye also finds his father at an old ship, but Bluto kidnapped Olive and intends to find a lost treasure that Popeye's father kept secret. At a bay, Popeye finally accepts his father's advice and eats spinach. This gives Popeye strength to chase away Bluto and beat up an angry octopus, thereby saving Olive.

It is unusual that a thought experiment in which Robert Altman directed a live-action Popeye film is something that actually happened in our dimension. Yet this 1980 adaptation of the popular comic-book and cartoon is a solid, easily watchable little flick, with a perfect casting: Shelley Duvall was born to play Olive Oyl, while the big-chinned Robin Williams fits as Popeye, and even nails his idiosyncratic accent. "Popeye" works the best during the first 30 minutes: Altman (who was probably chosen after the producers thought he could show more of his comic talent akin to "M*A*S*H") has a few surprisingly well choreographed scenes with style (for instance, a piano swings from a bridge, tied to a net, but misses Popeye who accidentally ducked just in time to pick up a pipe on the floor; during the cafe fight, a sailor swings a chair at Popeye, but it gets stuck to a hanging ventilator on the ceiling); the cartoonishly exaggerated characters and set-pieces have some charm while Williams already shows his sixth sense for comic improvisation ("Your name is Olive Oil? Sounds like some sort of a lubricant...").

Unfortunately, after some 40 minutes, the movie starts faltering, failing to find new inspiration that can fill up the rest of its running time, which feels like an empty walk in the second and last third. The storyline is too episodic and inconsistent later on: there is a subplot in which Wimpy thinks that Swee'Pea can predict the outcome of horse races, and another one where there is a boxing match, yet they all seem shoehorned and without a purpose, and even worse, without a worthy payoff. While the jokes work half of the time, the forced musical numbers work zero times, which is especially palpable in Duvall singing "He's Large" and "He Needs Me" which are both cringe worthy, and, it seems, the editors were complicit in trying to shorten them as much as possible. Popeye himself somehow feels strangely removed from the events: he should be the main protagonist and catalyst of events, but is not given that much room to "loosen up". His reunion with his father feels strangely unmoving and irrelevant, as if it was not needed in the film at all. Still, Altman has his moments, and it would have been interesting to see him do more comedy films with more creative freedom.