Sonja and the Bull 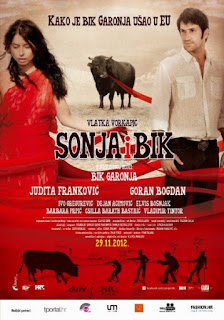 Zagreb. Sonja is an animal rights activist who is collecting petitions against bull fighting. Upon hearing of this, the owner of the black bull Garonja orders his son Ante, a insurance salesman, to take a drive from Dalmatian hinterland to Zagreb to confront Sonja about her allegations. Ante arrives at Sonja's apartment and persuades her to travel with him in the car to Dalmatian hinterland for a bet: if Sonja is brave enough to approach Garonja within three meters, she can ask what she wants. Sonja wins the bet and orders all the bull fighting to stop. Back in Zagreb, Sonja and Ante fall in love, but constantly argue over her animal rights activism. When a bull fight is nevertheless held, and Garonja loses, the owner wants to slaughter him, but spares his life upon hearing that Ante and Sonja fell in love.

This "rough" and "rustical", but somehow strangely refreshing and charming comedy surprisingly became a huge hit at the Croatian box office, offering an amusing commentary on the clash between the idealistic, vegetarian animal rights activists (Sonja) and the pragmatic meat eaters (Ante). Too many of the jokes either fall flat or end up lame, yet the said romantic yin and yang reaproachment  between Sonja and Ante gives "Sonja and the Bull" an element of something better than the average Balkan comedy, advocating for their relationship as a symbolic way of finding a middle ground between their two opposite world-views. The opening joke is fun (the owner is transporting the bull Garonja in the truck, but cannot pass the Croatian-Bosnian border because the bull's papers are not valid. So he simply drives the truck a little back and simply releases the bull to cross the border on foot), as are other small details that play with animal humor (Ante's iPhone has a bull's sound ring tone; Ante jokingly asking Sonja if she ever saw a cow or a bull in person, and she admits she didn't). Likewise, the director Vlatka Vorkapic inserts two erotic sequences rarely seen in Croatian cinema: one is when Sonja and Ante wake up naked in bed, and she stands up to turn on the TV. "Sonja and the Bull" is one of those rare films where the good intentions make it so sympathetic that they surpass its flaws and routine execution, while excellent Judita Frankovic managed to achieve a breakthrough role as the title heroine.