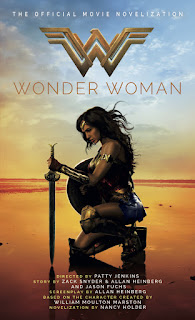 The mythical island of Themyscira. The Amazonian women, created by Zeus to protect human kind, train there, among them Diana, aka Wonder Woman. Their ancient enemy is the god of war, Ares. When an American soldier, Steve, accidentally crashes on the island, Diana hears about World War I waging on, and travels with him to London in order to find Ares and kill him, hoping this will stop the war. She meets British speaker Sir Morgan. Diana, Steve and a couple of allies travel to the Western Front in order to find German General Ludendorff, who plans to stop the armistice with a gas attack, since Diana assumes the latter is Ares. In a battle, Diana kills Ludendorff, but the war wages on. The real Ares then shows up, Morgan, who wants Diana to help him kill humans and cleans the world from them. Steve dies by flying the airplane with the gas bomb into the sky, letting it explode outside of populated area. Diana kills Ares, World War I ends, but she also realizes that there is both good and bad within humanity.

"Wonder Woman" is the best DC superhero film of the decade: it starts off with a rather clumsy and convoluted opening act, yet slowly builds up momentum and ends on a strong second half which leads to a poignant, even emotional finale with a point. Some flaws in the story remained unmitigated—for instance, it is illogical that Diana would be so surprised at war since the Amazonian warrior women constantly train to battle themselves, whereas it is somewhat vague as to how she intends to find or track down Ares if she doesn't know anything about him—yet the film is different and rare in its subgenre for showing a superhero who does not only battle fictional villains, but actually tackles a real world issue, in this case World War I. Through it, "Wonder Woman" contemplates about the debasement of worth of life in a deadly conflict, as well as the contamination of such a self-defeating mentality, where people are not able to get out of such a state, and instead just get consumed by a "culture of murder", which might lead to the end of the civilization. Ares, the god of war, thus becomes an allegory: Wonder Woman is not there to fight a specific enemy, but to try to tackle the sole notion of evil hiding inside every person.

Sometimes, there is a defining moment in film which establishes its tone and sustains it until the end. Here, it happens half-way into the film, when Diana gets out of the trench, puts on her Wonder Woman outfit, and simply runs on the Western Front battlefield, dodging every bullet with her bracelets, and even stopping heavy ammunition with her shield, in a sequence so magical that it sends shivers down the spine. Another great moment is Diana's reply to Ares, who claimed that people must be destroyed because they are evil: "You're wrong about them. They're everything you say... but so much more." Gal Gadot delivers the role of the lifetime as the title heroine, balancing both her innocence and strong warrior persona, even adding some humor at times. Chris Pine, on the other hand, is weaker, since he is too goofy as her partner. Some naive moments also bring the story's credibility down at times (for instance, the too simple way Steve steals the top secret book from Doctor Poison). Due to the strong finale, and the surprisingly sombre ending which contemplates about human duality, presenting good and evil as yin and yang, "Wonder Woman" lives up to its hype, and offers a rare treat of a strong woman ideal that feels genuine and cool, something not seen since "Sailor Moon" and "She-Ra".