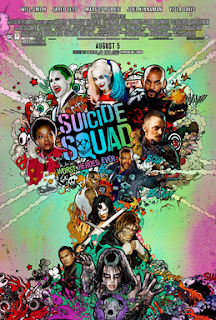 Fearing that a superhero human could in theory kill the US President and nobody keep him in check, intelligence officer Amanda is greenlit to assemble a secret paramilitary group from convicted criminals: these include assassin Deadshot, former psychiatrist Harley Quinn, pyrokinetic Santana, Harkness, crocodile mutant Killer Croc and Weiss. They all have to cooperate or they will be killed by an explosive capsule implanted inside their body. One recruit, June Moone, is possessed by the Enchantress, a Witch who wants to take over the world, so the Suicide Squad is sent to stop her. As a reward, Amanda reduces each of the convicts' sentence by 10 years. Deadshot gets a chance to talk to his daughter again. Harley is freed from prison by the Joker.

After a wealth of superhero films at the start of the 21st century, DC Comics decided to craft something different, a sort of "Dirty Dozen" anti-superhero film, where the bad guys save the world. Unfortunately, "Suicide Squad" is a bizarre patchwork, a hectic, over-edited, flashy, rushed action film that suffers from 'autistic direction' reminiscent of those depressive Nolan copycats, stuck in a confusing storyline where it is sometimes not even clear who is doing what—or why. This is mostly obvious in the supporting character of the Joker who is reduced to just a 5-minute appearance, even though it was hinted at that he played a bigger role in the film. The only interesting character is Harley Quinn (excellent Margot Robbie) who plays the "cheerleader" of this group, and—to a lesser extent—Will Smith as Deadshot, yet all the other members are just extras who stay far behind their shadow, unable to shine in the story. Neither is it clear what were the criteria for recruiting these members: their common denominator are not superpowers (because Harley and Deadshot don't have any), and thus it is strange why ordinary people are included into a group of people with superpowers. "Suicide Squad" is dressed in a washed-out optic and a pseudo-aesthetic, yet if its perfect technical aspects are removed (editing, cinematography, make up, special effects...), the concept is revealed to be as disappointingly ridiculous as it is: the squad has to fight a Witch (!). One of the best moments comes on the street, when Harley randomly breaks a window on a store, and the Army officer asks what is wrong with them. Harley then just replies: "We're bad guys. That's what we do!" Sadly, these moments of humor, wit or life rarely ignite in the "suffocated" atmosphere of "Suicide Squad", which practically commits a cinematic suicide.