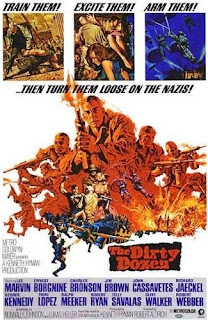 England, World War II. Unwillingly, Major Reisman is given a secret military assignment of choosing 12 inmates from a military prison whose sentences range from 20 years up to life in prison, and train them in order to infiltrate a castle in Brittany and assassinate numerous high ranking Nazi officials, which in turn would disrupt their chain of command for the upcoming D-Day. Among the "dirty dozen" are Wladislaw, Jefferson, crazy Franko, religious fanatic Maggot, Pinkley and others. Eventually, they succeed in killing them, but only three of them survive.

A small cult classic, "The Dirty Dozen" is still a fun and exciting action war movie which became one of the most popular achievements of the nihilist director Robert Aldrich, an undated extravaganza that plains attention thanks to its engaging story despite being basically a "mac flick": it is a dynamic, brutal and cynical action adventure. Lee Marvin is again in top-notch shape as the 'hard-boiled' Major Reisman who has to train the twelve convicts with unconventional means - in one sequence, for instance, one of the trainees has climbed up the rope but stopped just 3 feet away from actually reaching the platform at the top, lamenting that he can not do it. So Reisman just takes a machine-gun and fires just bellow his shoes, cutting off the lower part of the rope, upon which the scared trainee climbs up the platform in a second. Maybe 5 out of 12 trainees really are just extras, but the movie is surprisingly fluid and exciting, showing sense for 'raw' storytelling (which was imitated through numerous movies, even in "Inglorious Basterds"), whereas Aldrich again spoofs militarism and pretty much the whole human race. However, "Dozen's" big setback is the ending where the dozen traps numerous Nazi officials with women in a bunker, and slaughters them both: this failure to distinguish Nazis from Germans and even soldiers from civilians significantly decreases sympathy for the dozen and seems repulsive and distasteful. Maybe Aldrich wanted to say how the war is an ugly experience, but since the whole story up to it was fun and light, this misstep seems entirely out of place and convulsive.