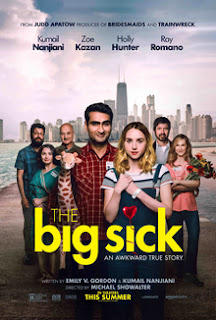 Chicago. Kumail is a Pakistani-born national who wants to make it as a stand-up comedian in the US, but has to work as a Uber driver to pay his bills. During one of his stand ups, a girl, Emily, contacts him and they end up in his apartment, sleeping together. Although reluctant to commit, Emily eventually starts a relationship with Kumail. When Kumail reveals that he does not intend to marry her, since his family would reject him due to already in advance planned marriage with a Pakistani woman, Emily breaks up with him. However, upon hearing that Emily became sick due to an unknown disease, and that the doctors induced an artificial coma on her, Kumail returns to take care of her, and meets Emily's parents, Beth and Terry. Due to such a stress, Kumail is unable to perform at a Montreal comedy festival. Emily wakes up from coma and rejects him, but changes her mind and meets him again in New York.

A gentle restructuring and amalgamation of "Guess Who's Coming to Dinner" and "While You Were Sleeping", this unusual romantic comedy is actually based on true events of screenwriters Kumail Nanjiani (who here basically plays himself) and Emily V. Gordon (here played by Zoe Kazan), depicting their tumultuous love story. Never as funny or as inspired as it could have been, "The Big Sick" is nevertheless a refreshing little independent film about real people and real emotions, showing how during a time of crisis, people show their true self: in this case, upon hearing his ex-girlfriend is sick, Kumail dropped everything and simply went to the hospital to help her anyway he can, revealing they still had a genuine connection even after their break up caused by their culture clash. The jokes are moderately amusing: in one sequence, while talking with Emily's dad, Kumail has this comedic conversation: "What's your stance?" - "What's my stance on 9/11? Oh, anti. It was a tragedy, I mean we lost 19 of our best guys". - "Huh?" - "That was a joke." A great little "stolen moment" has Kumail listening to Emily's voicemail on the phone, fondly remembering her personality before her coma, showing both her gentle side ("Hey it's me. If you just wanna come over and like kiss me for two seconds, I'd really love that tonight.") and her sense for spontaneous silliness ("Hey it's me. So did you want to meet at the gallery, or - Oh my god! Oh my god, a bird just hit me in the head. Oh my god I'm not kidding"). A few moments of "empty walk" and a rather rushed first 20 minutes which too hastily sets up their falling in love aside, "The Big Sick" is a film on the right place in cinema, whereas it also offers a dignified role to comedian Ray Romano as Emily's concerned father.