The Big-Hearted Will Take Away the Bride 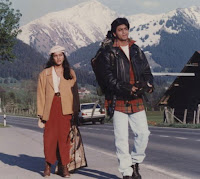 Simran is a teenage daughter of an Indian immigrant, Baldev, living in London. He notifies her of an upcoming arranged marriage in India, and she accepts it but decides to take a month off to go on a trip through Europe with her three friends one last time before that. On a train she meets an obnoxious guy, Raj, who is also a child of an Indian immigrant in London. Raj travels with his two friends, and they thus make friends with Simran's company. However, in Switzerland, Simran and Raj miss the train to Zurich and thus have to travel alone by foot. They find a cottage to spend the night. In Zurich, they separate, but realize they have fallen in love with each other. Raj travels to India and makes friends with Baldev, who is preparing for the wedding. Finally, realizing he wants to stop the wedding, Baldev expels Raj to a departing train, but Simran runs after him, boards the train and embraces Raj.

Director Aditya Chopra's feature length debut film "The Big-Hearted Will Take Away the Bride" became a smash hit and a 90s phenomenon in India — for instance, it attracted attention worldwide when it entered the Guinness Book of Records for playing for over 1,000 consecutive weeks in the Maratha Mandir theatre in Mumbai, displaying a staggering tenacity and appeal to the audience — yet its longest legacy is that it definitely established actors Shah Rukh Khan and Kajol as a star dream couple with a lot of chemistry, charm and innocence. The film plays homage to the classic Hollywood 'screwball comedies' from the 30s and 40s in which an unlikely guy and a girl would at first argue and bicker, only to later on fall in love, most noticeably to Capra's "It Happened One Night" with which it also shares a similar road movie format of a couple traveling on their own through a country and thus bonding. It also somewhat combines it with the concept of "Lost in Translation": just as the two Americans had to bond because they felt isolated and desolate in a foreign country, so do Raj and Simran have to cooperate in order to find their friends as Indians lost in Switzerland. This sense of solidarity of a diaspora or immigrants living abroad has some neat feelings of unity, comradeship and cozy familiar understanding, and it was also copied in numerous (lesser) later films about Indians living in the UK or America, from "Pardes" through "Sometimes there's Happiness".

The film is filled with numerous sweet comical moments in the first 2/3 of its running time: for instance, in her first scene, Simran's face is not even seen because the wind caused her hair to completely cover her face. It also displays several astonishingly sincere and genuine emotions or moments of wisdom: knowing she will get married to India to an unknown man, Simran begs her father to let her go one last time with her friends on a road trip through Europe, saying: "In that one month, I will live my whole life". While lost in Switzerland, they encounter several goofy situations, but stumbling upon a church, Kajol actually takes some time to uncharacteristically stop and make a sincere prayer in front of the altar — yet after she exits, Raj goes back towards the altar and secretly makes a prayer himself: "God, whatever she asked, please make the wish of that girl come true". This simple scene suddenly makes Raj a much more sympathetic, new character. Their interaction is gold, and the image of two Indians backpacking across the Alps is iconic, but unnecessarily weakened by overlong dance and musical sequences, some of which are downright silly (in the Swiss cafe, for instance). Also, this would have been a wonderful 2-hour film, but, unfortunately, Chopra prolonged it into a 3-hour film in which the last third, set in India where Raj tries to prevent Simran's arranged marriage, is a waste of time, falling into the territory of a soap opera. This is a huge pity, because they really had a genuine romantic comedy here, until the last third comes like an "intruder" in the storyline, like a completely foreign film. Still, there are even some small crumbs of inspiration even there, such as when Baldev returns to his homeland and meets his mother again, upon which she says: "I withheld my tears for 20 years. I cannot withhold them any longer".